Moonraker is the eleventh Eon James Bond film, the fourth to star Roger Moore, and the third Bond film directed by Lewis Gilbert: You Only Live Twice (1967), The Spy Who Loved Me (1977), and Moonraker (1979). Moonraker was the third Bond novel published by Ian Fleming, initially released in 1954. The producers originally intended to create For Your Eyes Only (as originally shown in the closing credits of the previous film, The Spy Who Loved Me), however with the rise of the recent Star Wars mania, they decided to go with the space theme for James Bond. 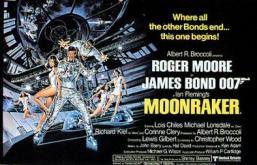 At the outset of the film, a Moonraker space shuttle is hijacked in midair so M summons James Bond to investigate. While on the plane en route to England, Bond’s plane is also hijacked by Jaws, the towering henchman from the previous film, and the credits open with a dramatic skydiving scene. Immediately, we get a sense of how goofy this film will be when a midair Bond steals a parachute from the falling assassin, and instead Jaws falls, not to his death, but gently onto a comical circus tent. James Bond is then sent to California, to the headquarters of Drax Industries, the manufacturer the Moonraker the space shuttle. He meets the sinister head of the company, Hugo Drax (played by Michael Lonsdale -the role for which he is best known), along with his Samurai henchman, Chang (Toshiro Suga), and Dr. Holly Goodhead (played by Lois Chiles -the role for which she is best known). Bond tests the centrifuge chamber when Dr. Goodhead is called away and Chang disrupts the test, nearly killing Bond as he spins around in circles. That evening, Bond sleeps with Drax’s pilot who feeds him blueprint information of a glass vial made in Venice, so the next day when Bond goes hunting with Drax (for some reason) and Bond deliberately shoots a marksman out of a tree, and Drax sends his attack dogs after his pilot. In a dark scene for a Bond film, she is hunted and killed by the dogs.

Bond trails the lead to Venice where he, once again, encounters Dr. Goodhead, and he realizes she is a spy, as well. They learn that the glass vials are being designed to distribute toxic nerve gas, and we see a ridiculous gondola boat chase scene through Venice. Bond is attacked by Chang, but he kills Chang by tossing him through the clocktower at Saint Mark’s Square. In another ridiculous scene, Jaws falls in love with a woman he meets. Bond and Goodhead then follow Drax’s business to Rio de Janeiro -Bond travels even after being dismissed by MI6, as they were disappointed in Bond’s lack of information about the nerve gas vials. Bond survives various attacks by Jaws. Bond travels down the Amazon River to Drax’s base. The last portion of the film takes place at a large space station where Drax is apparently attempting to create a master race of humans -an act which offends Jaws so he turns on Drax. This is followed by an absurd space laser battle, and Bond launches Drax into space. Bond and Goodhead escape in a pod, as do Jaws and his new girlfriend, Dolly.

Moonraker was created with the astronomical budget (no pun intended) of $34M, approximately twice as much as budget for The Spy Who Loved Me. And the high budget worked, fat least from a financial perspective, because Moonraker became the highest grossing James Bond film up to that point, a feat that was only later upstaged when Goldeneye was released.

Whereas in the early days Sean Connery had sophistication and wit, Roger Moore’s James Bond of the ’70s was sort of like a silly uncle always making uncouth jokes with a face that seemed to say: “I didn’t do it.” Aside from being a visually impressive film, Moonraker is a pretty terrible movie. It is almost like a parody of the James Bond series. Roger Moore is starting to show his age, and the once dynamic and intense James Bond chase scenes feel slapstick and campy. Perhaps the biggest eye-roll of the movie comes when Jaws, the menacing and fearsome henchman from The Spy Who Loved Me, falls in love with an awkward young girl. The element of space travel is something new for Bond, but it is an obvious grab at the popularity of Star Wars at the time. Though I enjoyed it more than I thought I would watching it through this time around, Moonraker ranks among the worst of the James Bond movies for me.