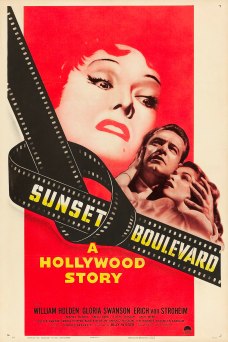 Sunset Boulevard is Billy Wilder’s homage to old Hollywood -its triumphs, its decadence, and even its decay. The film is a portrait of an aging silent film star who lives in her overgrown mansion, not unlike Dickens’s Miss Havisham in Great Expectations. Her name is Norma Desmond (played by true silent film star Gloria Swanson). She sits alone in her mansion, watching her old movies, waiting for the day when she graces the silver screen once again, with only the accompaniment of her butler, Max von Mayerling (slyly played by the great early cinema director, Erich von Stroheim). The parallels here are stunning: Erich von Stroheim once directed Gloria Swanson in such silent films as Greed and The Merry Widow, but he later only directed two “talkies,” eventually being reduced to playing token Nazi characters.

“There were three young directors who showed promise in those days, D.W. Griffith, Cecil B. De Mille and Max von Mayerling.”

The story is told as a noir-esque reflection, an investigative report by a struggling Hollywood writer named Joe Gillis (played by William Holden). He is being chased by his many creditors who threaten to reclaim his car and he escapes up a road and hides his car in what appears to be an abandoned garage, but he soon finds it to be the aging home of Norma Desmond. The scene is ominous, not unlike a silent horror film, such as Nosferatu. Norma demands that he stay and help her work on a script which she hopes will allow her to star in a movie again. He reluctantly agrees out of a need for money, like so many other struggling young writers who are chewed up and spit out of Hollywood. She screens one of her old movies (a scene from von Stroheim’s film starring Gloria Swanson Queen Kelly), and she plays bridge with some of her fellow silent actors: Butler Keaton, Anna Nilsson, H.B. Warner (who each play themselves). Soon, we discover that Norma Desmond is a forgotten star from yesteryear – Max is actually her first of three husbands who missed her so greatly that he agreed to return as her butler. He has been forging her fan mail and feeding her delusions for years, none more prevalent than the falsity that Cecil B. DeMille is planning to make another picture with Norma -when she visits DeMille he is actually filming a movie called “Samson and Delilah” and he greets Norma the way he used to greet Gloria, as “little fellow.”

“I am big. It’s the pictures that got small.”

The Desmond house was originally constructed on Wilshire Boulevard by William O. Jenkins, a millionaire with business interests in Mexico. It earned the nickname the “phantom house” because he had abandoned it after only living in it for a year. In the ’40s it was purchased by the widow of J. Paul Getty and it was sadly demolished by the Gettys in 1957 to build an office building.

Joe stays Norma only until he can no longer take her hazy dreamworld. He begins sneaking out to start work on a new script and he decides to leave only for Norma to shoot him, leaving his corpse floating in the pool. The police and the press arrive at her home, and Max direct the cameras as she descends the stairs for her final performance.

“Poor devil… still waving proudly to a parade which had long since passed her by.”

The film is a beautiful, haunting memory of forgotten Hollywood. It contains numerous allusions to early film-making from the silent era, such as when Norma pantomimes Max Sennett’s “bathing girl” and performs a brief sketch as Chaplin’s “Little Tramp.” It won several Academy Awards.

“There’s nothing else. Just us, and the cameras, and those wonderful people out there in the dark. All right, Mr. De Mille, I’m ready for my closeup.”