Way Down East is a far more sentimental film than many of D.W. Griffith’s other works. Once again, the leading star Lillian Gish delivers an excellent performance with several memorable moments. However, the film lacks a certain quality that inspires excellence that can be found in Griffith’s Birth of a Nation and Broken Blossoms. It is a beautiful picture, but a pitiable melodrama with an unbelievably perfect ending that strains credulity. This film is one of four different films based on the play of the same name by Lottie Blair Parker, an inexperienced writer from whom Griffith bought the rights to the film. This was the third silent film of the story, and it was later followed by a 1935 “talkie” starring Henry Fonda. It was one of Griffith’s most commercially successful films, and it was also even more expensive than Birth of a Nation (1915). It was subtitled: “A Simple Story of Plain People.”

“Since the beginning of time man has been polygamous – even the saints of Biblical history – but the Son of Man gave a new thought, and the world is growing nearer the true ideal. He gave of One Man for One Woman. Not by laws – our Statutes are now overburdened by ignored laws – but within the heart of man, the truth must bloom that his greatest happiness lies in his purity and constancy. Today Woman brought up from childhood to expect ONE CONSTANT MATE possibly suffers more than at any other point in the history of mankind, because not yet has the man-animal reached this high standard – except perhaps in theory.”

Anna and her mother are impoverished and in need of money so Anna travels to the city in search of money from her wealthy cousin. Her cousin and sisters reject Anna at a ball they are having, until their obscure extremely wealthy aunt gives Anna nice clothes. However, at the ball Anna catches the eye of Lennox Sanderson who is a known womanizer.

Near the Sanderson family estate is Bartlett Village which is owned by Squire Butler and his attractive well spoken young farmer’s son named David. They live out in the country.

Meanwhile, Lennox lures Anna to his house saying that his relative will meet them there, but when she arrives there are only two of them. He tries to grab Anna but she grows angry until he says he wants to marry her. She is immediately smitten and accepts. They are then married in a sham wedding staged by Lennox with some friends acting as proper religious people. He pays them off. Soon, the couple begin their honeymoon during which Anna gets pregnant, and later Lennox admits that the wedding was a sham, leaving Anna sad, lonely, and with her child.

After Anna’s mother dies, she wanders away to hide her shame and she gives birth to her baby, who then gets sick and dies. She then goes to find work and winds up on Bartlett’s farm where David quickly falls in love with her.

Soon rumors circulate that Anna had sired an illegitimate child and Bartlett, in a rage, banishes Anna, sending her out into a snowstorm. This all occurs during an awkward dinner in which Lennox is visiting and making passes at another girl at the house, Kate, to whom David was initially betrothed from a young age. David follows Anna out into the storm and rescues her from a floating piece of ice before a waterfall. In the final scenes Lennox apologizes to Anna and offers to marry her, but Anna rejects him over David. Together Anna and David get married, along with two other couples from the film.

The scenes at the end of the film were highly dangerous and Lillian Gish’s hand was damaged for years after being in freezing water. However, the ice pieces were actually made of wood. 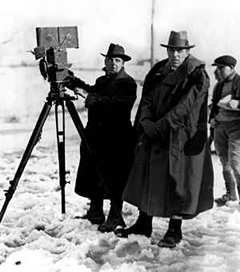