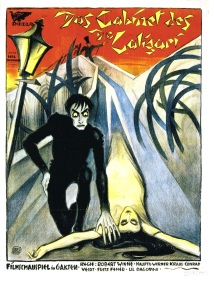 The Cabinet of Dr. Caligari is yet another example of the German Expressionist movement pushing the boundaries of cinematic creativity in the early era of silent film. This picture is haunting and enchanting, the set designs are twisted and nightmarish, and the acting is perfect for the tone of the film. The Cabinet of Dr. Caligari is not only one of the best films to emerge from the silent era, but also one of the greatest films of all time.

The screenplay for this powerful film was written by Hans Janowitz and Carl Mayer, both Bohemian and Austrian/Jewish German writers. The idea came when Janowitz was walking through a carnival one night in Hamburg, Germany, when he heard laughter and suddenly a young girl ran by, disappearing just ahead into the bushes. He also saw a strange man lurking in the shadows behind her. Later, he read in the newspaper that a girl matching the one he saw had been murdered at the carnival. Thus, the plot of one of the first truly incredible horror films was formed with the disappearance of a young girl. The Cabinet of Dr. Caligari is one of the first films to employ the use of flashbacks, and one of the first films to contain a twist ending. It was released in Germany post World War I and it is considered a classic of German Expressionism. Before the release of the film, mysterious posters reading “Du muss Caligari warden” (you must become Caligari) began popping up all over Germany as marketing for the film.

The film opens with Francis and an elderly friend sitting on a bench in a forested wilderness. A ghostly woman walks by and Francis says the apparition is his fiancé. He proceeds to tell a harrowing story. The first title reads “Spirits surround us on every side…they have driven me from hearth and home, from wife and child.”

The flashback begins, Francis and his friend Alan are competing to see who will be the lover of Jane, the ghostly woman from the opening scene. They go to the faire at Holstenwall where they encounter Dr. Caligari who presents his 23 year old somnambulist, Cesare. Dr. Caligari keeps Cesare asleep in a coffin, or cabinet, regularly and he claims Cesare can foretell the future by revealing secrets. Alan asks Cesare how long he has to live, to which Cesare responds that Alan has only until dawn to live. That night, the murder of Alan is told through a mysterious shadow cast on his wall (a classic trope of German Expressionism).

Next, Dr. Caligari spots Francis and Jane spying on him and Cesare. He then orders Cesare to kill Jane, but Cesare only kidnaps Jane from her room, and they are followd during an extended chase scene. Cesare dies of exhaustion from the case. He didn’t kill Jane because of her beauty.

Francis goes to visit a mental asylum to seek out Caligari only to find that Caligari is the director of the institution. Francis reads Caligari’s journals and learns that he is obsessed with an Italian named Caligari who had a somnambulist in 1703 which he used to kill people. Francis and the other authorities confront Caligari about it, but when Caligari learns that Cesare, his prized somnambulist, is dead Caligari lunges trying to kill them all. They restrain Caligari and lock him up.

The narrative returns to Francis on the bench in the woods, but in a twist ending we discover that Francis is actually a patient at the asylum and the story is only a fantasy. “Caligari” is the asylum director and they restrain Francis once he sees Caligari again. The doctor says he can cure Francis, now that he knows that through his “mania” Francis believes him to be the infamous Dr. Caligari.

Throughout the film, many of the shadows cast are actually drawings on the ground or walls, and the shapes of building structures have been deliberately manipulated to appear fragmented and obscure. One of the key notions of the Expressionist movement is Ballung, or the crystallization of inner objects, concepts, and people through an artistic expression that cuts through and discards a false exterior. The sets are all made of paper with shadows drawn on them and at the time they were all built for $800 while the actors were paid $30 per day. Writer, Janowitz, was upset that Wiene framed the story as a flashback because he wanted it to be an indictment of the German government for its role in World War I, but instead Wiene glorified authority by placing Francis in an asylum.

One thought on “The Cabinet of Dr. Caligari”