The first Academy of Motion Picture Arts and Sciences (AMPAS) awards ceremony was held on May 16, 1929 at the Hollywood Roosevelt Hotel in Los Angeles and honored the best films of 1927 and 1928. It was a short private dinner, costing $5 to attend, with 270 people in attendance. The ceremony only lasted approximately 15 minutes, as winners were announced three months in advance, and it was hosted by the President of the AMPAS, Douglas Fairbanks. It was the only Academy Awards ceremony not to be broadcast. The Awards were created by Louis B. Mayer, founder of Louis B. Mayer Pictures Corporation, the company that later merged to form Metro-Goldwyn-Mayer, or MGM Studios. The award for Unique and Artistic Production was discontinued after the first Academy Awards, though at the time it was considered on equal standing with the award for Outstanding Picture.

Charlie Chaplin received an honorary award as did Warner Brothers for The Jazz Singer. Seventh Heaven was nominated for a total of five Academy Awards, Sunrise for four, and both won three awards. 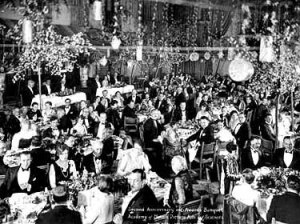 Unique and Artistic Production: Sunrise: A Song of Two Humans (1927)

Best Actor in a Leading Role: Emil Jannings, The Last Command and The Way of the Flesh