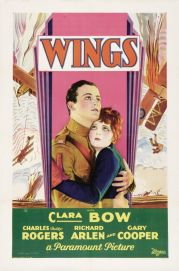 Wings is an undeniable film. It was the first to ever receive an Academy Award for Best Picture (1929), though in my opinion this honor should have truly been bestowed upon F.W. Murnau’s Sunrise. The grandeur of Wings exists in its lengthy high-flying aerial acrobatic scenes with impressive camera angles and extraordinary stunts. Wings is memorable for launching a number of Hollywood careers, like Gary Cooper, and for cementing Clara Bow as the “It Girl.” I can imagine Wings dazzling early 20th century audiences by bringing them closer to direct-experience with the “Great War.”

At the first Academy Awards presentation, the first award for Best Picture, given to Wings, was presented by Douglas Fairbanks (then head of the Academy) directly to Clara Bow on behalf of the film’s producers. Wings was also the only silent film to win Best Picture from the Academy before 2011’s The Artist (awarded in 2012). Hundreds of extras were involved in the shooting of Wings and they were supervised by experienced military officers, along with over 300 U.S. Air Corps pilots and planes for the spectacular aerial scenes. The film stars Clara Bow, Hollywood’s biggest star at the time. She was apparently unhappy with her role in the film, calling it a “man’s picture and I’m just the whipped cream on top of the pie.” The film also stars Charles “Buddy” Rogers, Richard Arlen, and a young Gary Cooper (Cooper launched his career from the small role in Wings). Both Rogers and Arlen completed all of the stunts themselves. Arlen served in World War I but Rogers did not and consequently he had to undergo flight training for the film. Despite the death-defying stunts only two incidents occurred on set, one of which was the fatal crash of a U.S. Army Air Corps pilot. Also during filming, Gary Cooper began a tumultuous affair with Clara Bow, despite her recent engagement to Victor Fleming. 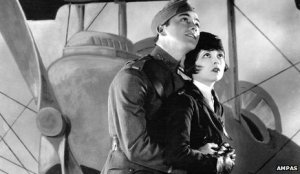 The film follows the intertwined rivalry of Jack Powell (Buddy Rogers) and David Armstrong (Richard Arlen) as they join the American Air Force during World war I. At the outset the film is dedicated to “those young warriors of the sky whose wings are folded about them forever.” Both Jack and David are madly in love with a pretty girl named Sylvia Lewis, but a close friend and girl next door, Mary Preston (Clara Bow) is tragically in love with an oblivious Jack. Together, they come up with a name for Jack’s car he built called the “shooting star” after Mary draws a star on it. At the outbreak of World War I, both men enlist in the ‘Air Service’ and Jack visits Sylvia who offers the gift of her picture for Jack to carry with him in the war, but secretly, her heart belongs to David.

The two share a tent with Cadet White (Gary Cooper) who dies in an air crash. After completing their training, both Jack and David become close and they are shipped off together to France to fight the Germans. Meanwhile, Mary works as an ambulance driver and overhears that Jack has garnered a reputation as “The Shooting Star” for his skilled piloting. One evening she spots him on leave in Paris. She tries to approach him, but soon learns that he is drunk with his friend and a loose woman on his arm. In truth, hte actor Rogers actually got drunk during the filming of this scene as he was only 22 and had never tasted alcohol before filming this scene. Mary convinces Jack to go home where she puts him to bed. While she changes back into her ambulance uniform, military police barge into his room and force Mary to resign her position, believing there was more to the scene than Mary innocently changing out of her dress and into her uniform. 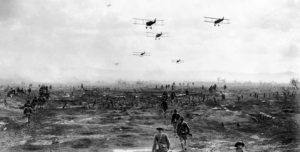 The apex of the film occurs at the Battle of Saint-Mihiel. David’s plane is shot down and he is believed dead. However, he survives and escapes the Germans while running through the forest. Soon, he recovers and steals a German plane in the hopes of crossing the allied line. Tragically, Jack spots the plane and believes it to be a lone German plane headed for Allied lines. Jack shoots down the German plane piloted by his old rival David.

On the ground Jack realizes his error and embraces his dying comrade as they share the first on-screen same-sex kiss (platonic). Jack is forced to return home where he is celebrated as a hero. He visits David’s family to beg for forgiveness but they do not blame him. Instead they lament the evils of war. Jack is reunited with Mary and he realizes his true love for her.

Wings was a public sensation upon its release, especially considering the public infatuation with Charles Lindbergh and the newfound fascination with aviation at the time. Throughout the film, chocolate syrup was used to create the blood effects and to date Wings is known as the only film to win an Academy Award for “Engineering Effects.” The aerial scenes were delayed for four weeks due to clear skies and William A. Wellman, a veteran pilot, knew how important clouds were to the audience who required spatial recognition of speed as they filmed over Texas. Wings is a truly powerful film. However, were it not for the prestige of winning the first Academy Award for Best Picture, Wings would likely be cast unto the shelf of forgotten war movies paving the way for All Quiet on the Western Front in 1930.

One thought on “Wings”