Buster Keaton delivers a delightful film with Our Hospitality -the second of his ten brilliant films under Buster Keaton Productions. It is more sentimental than some of his other later films, such as The General or Sherlock, Jr. The vast luxury of rural southern plantation life is beautifully captured, yet the characteristic slapstick humor of a Buster Keaton film is wonderfully displayed, as well. 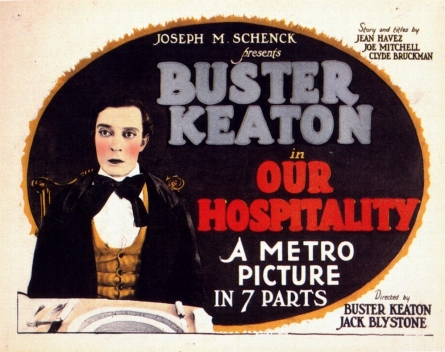 As with most Buster Keaton films, Our Hospitality delivers a perfect blend of humor, good story-telling, and sentimentality to make it a classic, as well as a pleasure to watch. This film comes highly recommended to lovers of classic cinema.

It tells the story of the feud between the Canfield and the McKay families, an obvious allusion to the Hatfields and the McCoys, and out of fear of the dispute, the mother of the McKay family sends her son Willie away to New York where he is raised without knowledge of the feud. When his mother dies, Willie returns to the south to claim his inheritance and rides with Virginia, a woman who turns out to be a Canfield (played by Keaton’s wife). Upon arrival, he mistakenly asks a Canfield where the McKay estate is and the man tries to stop at each shop on the way to purchase a pistol to kill Willie. However, he escapes to find that his estate is more dilapidated than he had hoped, and Virginia invites him to dinner.

The Canfield patriarch reassures his sons that welcoming in Willie will be “our hospitality” and a local parson also comes to stay for the evening as it starts to rain, but Willie overhears what kind of danger he is in and tries to escape wearing a dress. A chase scene ensues that follows Willie down a cliff, into a lake, tied together with one of the brothers, onto a train, and down a river. It ends when he floats by Virginia who is rescued in a famous scene at the edge of a waterfall, dangling in the air. 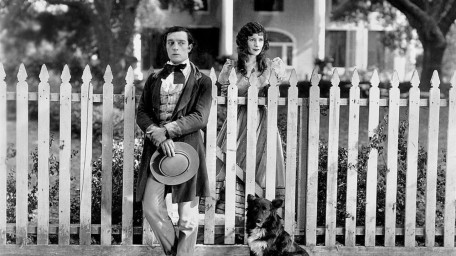 The film ends when the Canfields give up the chase at dark to find Willie and Virginia embracing and the parson beckons the patriarch to kiss the bride below a “love thy neighbor” sign. This causes the Canfields to end the feud and Willie empties his pockets of all the Canfield guns he stole.

The film was shot in California and Oregon, and some of the scenes featuring trains were clear precursors to his great film, The General. Many scenes were even shot in the same locations. Keaton nearly died in the Truckee River filming one of the scenes after his safety cable broke. The dangerous scene remains in the final cut of the film, but Keaton was saved by a branch and a bend in the river. Also, in the climactic waterfall scene, Buster Keaton inhaled so much water that he needed to be medically treated. It is the only Keaton film to feature both his father, as the train engineer, and his infant son who played a young Willie.