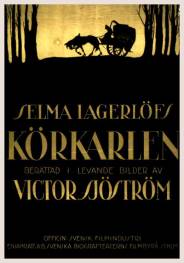 The Phantom Carriage is a phenomenal and haunting Swedish silent film, and is popularly considered one of the seminal works of Swedish cinema. It was directed by and also starred Victor Sjöström, of later repute for his roles in The Wind and, most notably, in Ingmar Bergman’s Wild Strawberries. Bergman would later go on to praise this film as one of the greatest of all time, having a powerful influence on him, and he claimed to watch it at least once every summer. The Swedish title, Körkarlen, can be translated to mean “Wagoner”. It is based on the award-winning novel of 1912 called “Thy Soul Shall Bear Witness!”

This is a great film filled with remarkable special effects far beyond its time. I took careful note of its brilliant and advanced cinematography which set an eerie tone for building the terrifying suspense and tension, a significant achievement for an early horror film. It comes highly recommended to lovers of classic film.

It tells the story of Edit, a dying sister of the salvation army, who cries out for David Holm, played by Sjöström. At that moment he is in a graveyard describing an old Swedish legend: the last person to sin and die on New Years Eve must drive Death’s ghostly carriage and pick up the souls of the dead for the year. This story reminds him of his friend Georges who died. Then a fight breaks out and Holm is smashed over the head with a bottle, apparently killing him. Suddenly Georges appears driving the phantom carriage and David is filled with remorse. Georges takes David on a series of dreams, or flashbacks, and in homage to Charles Dickens’s A Christmas Carol, Georges shows David how much better his life was before the influence of Georges and his drinking. The two of them appear before Edit who begs them not to take her on the haunted carriage of the dead, and just before they do, David awakens in the graveyard and he rushes home to his family.