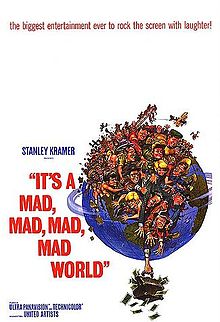 The film tells the hilariously chaotic story of five random travelers who witness a car accident near Palm Springs in California. A man, a former fugitive, ran his car off the road and shortly before dying he notifies the people that he buried $350,000 below a “big W” in Santa Rosita State Park in Southern California. Initially, the group tries to carry on wherever they were headed, however it quickly devolves into an all-out race for the cash as the group is entirely incapable of compromising or splitting the money in any way. One couple charters a plane, another steals a car, one gets trapped in a hardware store and so on. After much destruction and purely anarchic plot, not unlike a Groucho Marx situation, the group arrives at the park and discovers the spot beneath several palm trees. They start digging and the chief of police arrives and tells them all to turn themselves in. However before they can do so, they discover that he tries to steal the money so they chase him through a series of crazy situations. Finally they all arrive at the top of a building in Orange County and the briefcase full of money opens and the money is let loose to crowds below. They all fall from a rescue ladder and are hospitalized and the film ends.

The film is a fun romp through Southern California and is worth watching for a chaotic laugh featuring many famous actors including Spencer Tracy, Milton Berle, Mickey Rooney, Jerry Lewis, Buster Keaton, The Three Stooges among many others.