The Barretts of Wimpole Street is a delightful film that reminds audiences of simpler times in old England. However, it lacks grandness and is perhaps best kept as a play, as much of the film is reminiscent of a staged theatrical production.

This historically accurate film tells the story of Elizabeth Barrett and Robert Browning, both notable English poets during the Victorian era. It was based on a play of the same name by Rudolf Besier in 1930. There was also a subsequent film released in 1957.

It takes place primarily at the large Barrett estate. Elizabeth Barrett, called “Ba”, is suffering from an unknown illness which has rendered her immobile. Her father Mr. Barrett rules over the house like a tyrant, not allowing any of his children to get married or leave the home. He frightens each of the children. Later, in a moment of confrontation, Ba confronts her father and he reveals that sexual love has ruled over him his whole life, and even insinuates that his wife was raped by him to produce some of their offspring. Eventually, Ba falls in love with Robert Browning and confronts her father and he departs. She flees in the night to marry Robert Browning, and leaves letters for his siblings and father. Her father tries to have her dog, Flush, killed, but Ba has taken the dog with her. 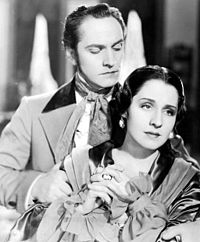 The real Robert Browning (1812-1889) was an early Victorian poet known for his poems Pauline and Paracelsus. He was an elder statesman of sorts for the English literary community. In 1846 he married Elizabeth Browning (1806-1861) who was six years his senior. She is remembered for such poems as “How Do I Love Thee?” (Sonnet 43, 1845).