Trouble In Paradise is a fun and well-crafted film by Ernst Lubitsch. It is a departure from the typical hero story -it is a strange experience for the audience to be rooting for two thieving pickpockets, but nevertheless the film is charming and worth watching for lovers of great cinema.

The film is popularly considered Lubitsch’s greatest film and was one of his own favorites. It was honored with the moniker for the “Lubitsch Touch” -the otherworldly quality of his comedy films, like Ninotchka (1939) and The Love Parade (1929) Wes Anderson later credited Trouble In Paradise film as one inspiration behind The Grand Budapest Hotel in 2014.

The story is based on the 1931 play The Honest Finder by the Hungarian playwright, Laszlo Aladar. It takes place in Europe, between Venice and Paris, and it tells the story of two charming thieves, who encounter one another, fall in love, and flee together in the end. They encounter Mariette, the heiress to a reputable perfume company and pose as a count and countess in order to rob her. They are nearly caught on several occasions when other individuals they have robbed appear to recognize them. In the end, they flee in a taxi together after Mariette discovers who they truly are. As a parting gift, they rob Mariette of her prized pearl necklace. 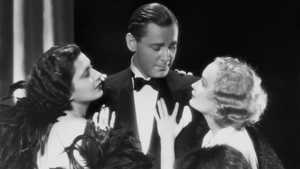 The film is rife with sexual innuendo and suggestive dialogue. In 1943, Paramount wanted to make a musical version of the film but was rejected based on the new production code enforced by Hollywood, often called the “Hays Code” as a result of Will H. Hays, president of the Motion Picture Producers and Distributors of America (MPPDA). The code lasted in effect from 1930, though it began being rigidly enforced in 1934, and lasted until 1968, though it stopped being rigidly enforced around 1954.

Ernst Lubitsch was born in 1892 in Berlin to a Jewish family. His father was a tailor, but when Ernst was old enough, he turned his back on tailoring and entered theatre. At first he was an actor before moving into his role as a director. He left Germany for Hollywood in 1922 to become the contracted director for Mary Pickford. He landed a remarkable contract with Warner Bros for a three year, six picture contract that gave Lubitsch full control of his early silent films, and other later celebrated films with the advent of talkies, such as The Smiling Lieutenant in 1931, and his most famous and cynical comedy film Trouble In Paradise in 1931 which could not have been made after the enforcement of the production code and which earned him the moniker of the “Lubitsch Touch”. He continued to direct comedies, including Ninotchka with Greta Garbo in 1939. He died of a heart attack in 1947 in Hollywood.