The Man Who Knew Too Much (1934) Director: Alfred Hitchcock 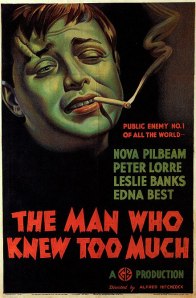 When Francois Truffaut famously interviewed Alfred Hitchcock (published in 1967), Hitchcock remarked that The Man Who Knew Too Much (1934) was merely the work of an amateur. Hitchcock later went on to create his own remake in 1956, which he much preferred. The film holds nothing in common with the G.K. Chesterton book of short stories of the same name. Apparently Hitchcock held the rights to the title of the book.

Nevertheless The Man Who Knew Too Much of 1934 is an excellent film. A family is on a trip to Switzerland, Bob and Jill Lawrence and their daughter Betty. They befriend a man at their hotel, and Jill proves herself to be an excellent shot at clay pigeons. That evening, their new friend Louis is shot through a window while he dances with Jill. He reveals a secret to Jill about a note in his room that needs to be delivered to the British consulate about a crime that is going to take place. An international criminal group kidnaps their daughter Betty and threaten to kill her if the couple reveals anything they know. Therefore, of their own accord, Bob and Jill eventually track Betty down to a strange cult in London where they kidnap Bob, too. Meanwhile, Jill attends a performance at the Royal Albert Hall where an assassination attempt is planned of a European nobleman. She screams at the last moment before a gunshot happens, which distracts the gunman. He flees in a car but the police chase him to the house of his criminal group. A massive shootout scene occurs, and eventually the police kill all the criminals and rescue and reunite the Lawrence family.

The great Peter Lorre, of M and later Casablanca fame, played the lead criminal agent in the film. He had only recently fled Nazi Germany and spoke very little English. He had to learn his lines phonetically for the film.

Although Hitchcock preferred his own 1956 remake, the 1934 version is an excellent film – worth watching again and again. The master of suspense demonstrates his early skills – particularly notable is a scene in which a murder is planned at the Royal Albert Hall, Jill fades in and out of consciousness while the camera blurs and quickly cuts between scenes of a ruffling curtain, the European nobleman to be killed, and a gun slowly moving out of stage-right. The tension built in the film is palpable.