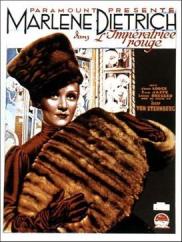 Josef von Sternberg once said of his film: “It is a relentless excursion into style.” The Scarlet Empress is a cinematic delight. The film is filled with striking imagery, expressionist lighting, and it is topped off with excellent acting from the great Marlene Dietrich, von Sternberg’s actress of choice. It is in part a historical retelling of the story of Catherine The Great. The film was the sixth of seven collaborations between Dietrich and von Sternberg.

“About two centuries ago, in a corner of the kingdom of Prussia, lived a little princess – – chosen by destiny to become the greatest Monarch – – Tsarina of all the Russias – – the ill-famed Messalina of the North.”

It tells the story of Sophia (pronounced with a long “i” sound) Frederica, a shy princess from Germany, or rather Prussia. She is swept off her feet by a stranger, Count Alexei from Russia who promises her a charming prince back home in Russia for her to marry. She accepts and goes to Russia only to find his lavish descriptions lacking. The palace is dark and frightening and her betrothed is an odd, homunculus, the Grand Duke Peter. The only goal for bringing her there was for her to produce an heir for Russia. Nevertheless, she relents and marries Peter, thus becoming Catherine II (later Catherine “The Great”). In the second half of the film, her personality changes when she bears a son, after sleeping with a palace guard in the stead of her hopeless husband. She becomes Queen of Russia in 1762. embraces her eroticism, as a confident and highly sexualized leader of Russia. Even today, rumors abound of her many lovers and obsession with the erotic. There has been a longstanding bawdy tale of her death – engaged in her carnal desire for a horse, when in fact she died of a stroke. In her later years, she claimed her husband was an eccentric, lazy fool and that they never consummated their marriage. Instead their son was the product of another one of her lovers, according to her memoirs. This portrayal of Peter is what is used in the film. Once she draws herself in contact with her husband, the country falls in line behind her. She dominates legions and overcomes her former husband, Peter, to claim the throne of Russia. In the end she claims her throne and Peter is assassinated by one of her lovers.

The film was released at the same time as the Hay’s Code was being instituted in American cinema. It was one of the last films released prior to the code’s enforcement. Oddly enough, this was not the only film about Catherine The Great to be released in the year 1934. The British film The Rise of Catherine The Great was also released in 1934, and it starred Douglas Fairbanks Jr. as Peter. The full seven films that von Sternberg and Dietrich collaborated on are as follows: The Blue Angel, Morocco, Dishonored, Shanghai Express, Blonde Venus, The Scarlet Empress, and The Devil Is A Woman. Their relationship is truly remarkable. Von Sternberg turned her into an iconic star from suburban German schoolgirl. He first encountered her a Berlin cabaret. It was a successful, though turbulent relationship, as Von Sternberg was known to be demanding and eccentric. When the times changed, and their suggestive and excessive films were no longer en vogue, they parted ways in 1935.