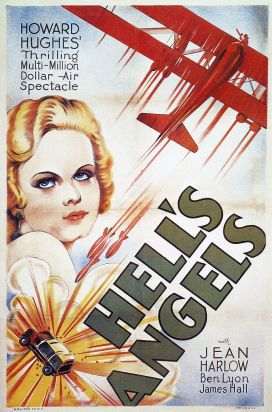 Hell’s Angels is a well-known classic war epic. It is primarily known for two reasons: Howard Hughes’s (Producer & Director) exorbitant budget for the film and it was Jean Harlow’s (18 years old) first major role in a film. It was the costliest film to hit the screen (with expenses of $2-$4M, no one truly knows) until the release of Gone With The Wind which cost $4M.

It tells the story of two brothers in England who leave to fight in World War I, Roy and Monte. Although Monte doesn’t exactly volunteer to enlist. He is the lazy, pleasure-seeker of the two brothers. At the outset, Monte is challenged to a duel for having an affair with a German officer’s wife, he flees the scene but his brother Roy is mistaken for Monte the next day and is shot in the arm in a duel. While in the British Royal Flying Corps, Roy falls in love with with a sensual woman, Helen (Jean Harlow). However, one night at a dance she persuades Monte to take her home and she seduces him with a famous line: “Would you be shocked if I put on something more comfortable?” He feels terrible remorse for cheating his brother.

The film has some remarkable scenes of a German zeppelin before and after it comes crashing to the ground, as well as the suicidal officers aboard, and it also contains other impressible aerial footage, notably two pilots died during filming. Roy and Monte narrowly survive a crash-landing. Back in France, Monte is branded a coward, and thus he and Roy volunteer for a suicide mission. Their mission is a success but they are shot down by the Red Baron in Germany, and are captured. Monte agrees to talk, but to prevent this, Roy convinces the German officer to give him a gun and he shoots Monte in the back. The film ends after Roy is executed.

The eccentric Howard Hughes kept rapidly changing direction to staff throughout the creation of the film, including originally intending for the film to be a silent movie, but after the advent of The Jazz Singer, he incorporated the new sound technology. Hughes, himself, was badly injured in a very dangerous aerial stunt that closes out the film. He fractured his skull. He even attempted to buy all available aircraft for war films in order to prevent a competitor, the release of The Dawn Patrol, another war film released in the same year. When that didn’t work he brought a lawsuit against them in an attempt to slow down production, however they sped up their film and The Dawn Patrol was released before Hell’s Angels.

Jean Harlow (1911-1937) “The Blond Bombshell” was one of the great actors of the early 1930s. She was the predecessor to Marilyn Monroe (Monroe idolized Harlow). She had a chaotic and abusive family life, and she dated a series of abusive middle-aged men and she is believed to have been an alcoholic. She initially posed scandalously for postcards before she was discovered and featured by Howard Hughes. She was a superstitious person, and in fitting with her voluptuous personality, she never wore any underwear. She was married to Paul Bern, an MGM executive, for two months until he committed suicide in their home. She tragically died in 1937 at the age of 26. Since she was young she contracted scarlet fever, and contracted a series of diseases as she got older including influenza, and she received a severe sunburn. Additionally, her hair coloring was poisoning her head and her hair began falling out. Her kidneys ultimately failed her. She appeared fatigued while completing Saratoga, a film with fellow star Clark Gable that was completed after her death. She also starred with him in Red Dust in 1932.

It was one of the more popular films of the early 1930s, however despite its popularity and due to the high cost of the film, it never recovered its costs. In hindsight, the film is greatly overshadowed by other far superior war epics, like 1930’s All Quiet on the Western Front.