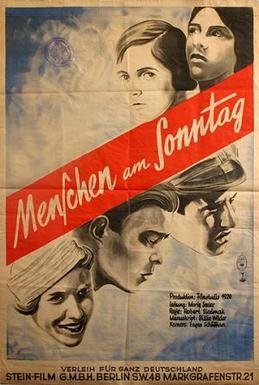 “Menschen am Sonntag” is a short German silent film released in 1930, lasting slightly longer than one hour. The film is largely without a plot, shot over several Sundays in and around Berlin. All the actors were daily workers in Berlin -ordinary people enjoying their lazy Sunday around the city. It is an experimental observationalist film. The project was funded by the Siodmak brothers’s father.

“Menschen am Sonntag” has historical significance for showcasing the simplicities of daily life in Berlin for Germans just prior to the rise of Hitler in the Weimar Republic. Indeed, Robert Siodmak would later become a casualty of the Nazi era. After being attacked by Goebbels, he fled to Paris where he produced a number of highly influential films and then he eventually wound up in Hollywood. The Criterion Collection revamped the significance of this film with their re-release in 2011.

The film is remarkably enjoyable with extraordinarily captivating cinematography. It represents a once in a lifetime collaboration between future successful Hollywood filmmakers: Robert Siodmak, Edgar G. Ulmer, Billy Wilder, and Fred Zinnemann. The film is a delight: filled with sunlit and hopeful scenes of innocence and joy lingering beneath the shadow of totalitarianism.

One thought on “People on Sunday”