Les Vampires is a series of French short serials that were released in the early days of pioneer film-making. They are silent episodic films (10 episodes in total) and last over 400 minutes long. Curiously enough, the episodes are not about actual vampires, and instead they are about a gang of evil people, not the un-dead. The series has often been compared to the Perils of Pauline, the well-known American silent film series.

The series tells the story of a reporter who attempts to bring the ‘vampire’ criminal gang to justice as they go about killing people and causing destruction. The band is led by the Grand Vampire, and his trusted associate Irma Vep (a re-ordered spelling of “vampire”). Curiously none of the episodes end on a cliffhanger, as was popular in America. 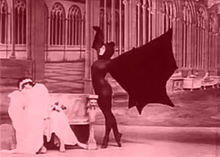 Feuillade had success with several others silent film series, such as Fantômas, a crime serial or Judex, a French hero serial. The film was shot on location in Paris, which was during WWI. It was released between 1915-1916.

Admittedly, I only watched the first episode of Les Vampires, “The Severed Head” – a slow-paced story about a reporter who investigates the cult-like activities of a gang as they commit a beheading. The plot structure is chaotic and difficult for the modern viewer to adjust, as the film was shot on the spot with little script preparation. It is moderately entertaining, but need not be revisited. Interestingly, the series was included in Steven Jay Schneider’s 1,001 Movies You Must See Before You Die.