I recently attempted to finish watching Foolish Wives (1922), and it is a monumental task, even for a silent film. It lasts nearly 2.5 hours long, and the plot is vague, slow, and wandering. It tells the story of a man who dubs himself a Count in order to seduce a wealthy women and take their money. The plot plays out like an erotic tragedy, and von Stroheim, himself, plays the Count. Originally von Stroheim wanted the film to be 6-10 hours long. Thankfully, the studio drastically cut down the film’s run-time (a rare praise from me for a studio doing such a thing). 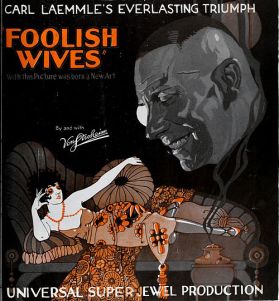 Foolish Wives is sort of a sinister and salacious film, but the sets are marvelous. It is certainly not von Stroheim’s best film but it is an important picture to the history modern cinema. I am glad I got through it, but I cannot in good faith recommend this film.

Erich von Stroheim tried to sell the movie as the first “million dollar movie” ever made, and the studio obliged, though exact costs are hazy. This film launched his odd persona in film-making as a “perfectionist.” Reviews tended to focus on the extravagant costs to make the film, as well as the elaborate set for Monte Carlo, a huge coastal set which was destroyed at one point and had to be rebuilt.