“The Little Match Girl” is a beautiful and dreamy short Renoir silent film. It is difficult to find a bad Renoir film. “The Little Match Girl” is a sad little story, but the cinematography and editing in this film makes incredible use of the camera -from blurry scenes showcasing the cold on a window pane, to an intense chase-scene on horseback from the figure of death in the clouds, this Renoir film is a bittersweet little dream.

The story is based on a Hans Christian Anderson short story. It tells of a poor girl who wanders the streets of Paris selling matches on a freezing night (New Years Eve). She gazes longingly into shop windows (one scene is particularly memorable as the camera blurs for the audience while she struggles to see the figures inside). She also attempts to befriend men on the street, like a policeman. Eventually, she huddles into a corner, as she does not want the shame of returning to her family’s shack without having sold anything, and she falls asleep, dreaming a surreal dream of a toy store in which the mannequins and toys come alive. The embodiment of death appears in her dream-store and they fly into the sky in a remarkable special effects-ridden, chase scene. In the end, she envisions a plant that arises, contrasted with her frigid body lying in the snow on the street. She dies and her corpse is inspected by passers-by. 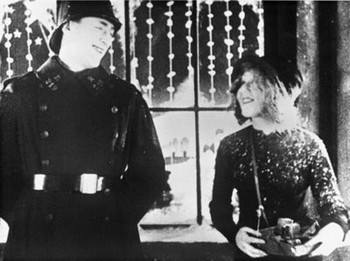 The film lasts about 30 minutes, and apparently the daughter of James Joyce played a brief, minor role in the film. Renoir was married to the lead, Catherine Hessling, however they divorced shortly after this film was completed. Hessling starred in most of his nine silent films.