Some may call it avant-garde and excessive, while others call it valuable for its historical significance. Berlin is the quintessential “city symphony” film, of which there were other minor films in Paris or Manhattan. 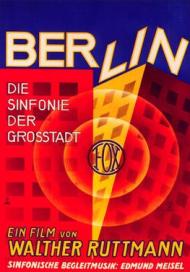 Berlin is a brilliant movie filled with powerful scenes of daily life in Berlin, in particular the scenes at the outset of the film of empty city streets are striking. This is an extraordinary classic of the silent era.

In Act I of this plotless film, we find ourselves boarding a train, experiencing motion, as we rush by open fields and small suburban homes. Gradually we approach our station. It is early morning and very few people are out in the streets of Berlin. The director lets us see beauty (architecture, water, quiet and empty streets) and also grit (birds chewing on a dead rodent, sewage water, garbage and so on). Gradually we start to see people emerge, cars and trains, and factories as the machinery of the city comes to life.

In Act III, we move further along on the metro to find construction sites. Traffic stops slow the pace of business, yet make the streets seems congested and busy. We see shots of electrical grids, vagrants and police officers.

In Act IV, the clock signals it’s time to stop work. Men go to drink beer. Horses eat their meals. Restaurants begin to fill. A boatsman pushes his boat along the river. Children play in the streets and in the park. Older gentlemen sit for coffee, and newspapers begin to print and distribute. The tempo grows chaotic as someone’s hat blows away and people ride a rollercoaster. The winds come in and it starts to rain.

In Act V, citizens enjoy entertainment and leisurely activities -the circus acrobats, a marching band, roller skating, dancing, Far off in the distance lights flash, what appears to be fireworks, and a lighthouse circulates. This concludes the film.

The theme of this film is to holistically capture a city, as much as is possible. The goal is to leave an impression of daily life in a city. It harkens back to the Soviets and their cinematic montage theory, or also Man With A Movie Camera. The film is a kind of time capsule, that allows a glimpse into daily life in Berlin, between the wars and shortly before the terror of Nazism takes over.

Walter Ruttman was an experimental German filmmaker who made several avant-garde movies, before completing his magnum opus, Berlin. After the rise of the Nazis, he went to the frontline as a photographer, but he sustained injuries that eventually killed him. He is best remembered for Berlin.