Camille is an elegant and beautiful MGM film starring Greta Garbo, and showcasing the heights of classic cinema in the 1930s. It is a story of a love-triangle, based on an 1842 story by Alexandre Dumas fils (the Younger), La Dame aux Camélias (“The Lady with the Camellias”). He wrote the story at age 23. It was then adopted for the French stage in 1848, debuting in 1852. Guiseppe Verdi loved it so much that he put it to music -his famed 1853 opera, La Traviata. The main character is Marguerite Gautier, based on Marie Duplessis, the real-life lover of author Dumas. The story is based on their brief love affair.

The following is a 19th century painting of the true Marie Duplessis, Dumas’s brief lover. She was also the lover of Franz Liszt, among other prominent men and benefactors in and around Paris. She was known as a witty and amiable socialite. This painting was completed by Édouard Viénot, a French portrait painter of figures in high society at the time. 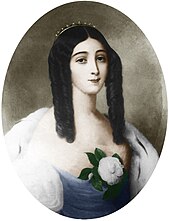 Camille is quite possibly Greta Garbo’s finest performance. For it, she was nominated for an Academy Award, which was the sole nomination for Camille. The film is brilliantly well done, the plot is at once light and yet also a heavy tearjerker. It is a powerful film from the golden age of Hollywood.

The film tells the tragic story of Marguerite Gautier (Greta Garbo), a lower class woman of Paris who rubs shoulders with wealthy elite men. She suffers from “consumption” (Dumas’s real mistress is believed to have suffered from syphilis). She is being financed as the mistress of Baron de Varville (Henry Daniell), however she still brings great debts upon herself. She falls in love after meeting Armand Duval (Robert Taylor), a handsome young man with a modest amount of wealth. She decides, in a fit of passion, to go away with him for the summer to his rural home in the country outside Paris. They spend a splendid summer in bliss together, promising to marry one another. However, one day Armand’s father (played by Lionel Barrymore) arrives and shames Marguerite and persuades her to leave Armand, to protect him from the certain scandal. She leaves him and returns to the Baron in Paris. In anger, Armand returns to Paris, and after a confrontation the Baron and Armand duel, with Armand wounding the Baron. He flees Paris for six months due to the laws, and in that time Marguerite’s health declines and her debts continue to pile. Armand arrives at her home just after the priest administers her last rites, and he enters her room and they dream of going away back to his country home, as Marguerite dies in his arms.

The story was made into a film many times, the 1936 film being the sixth English-speaking version and generally the best, thanks to Greta Garbo’s performance. In fact, Rudy Valentino had once played a role in the 1921 version. Interestingly enough, the story of Camille makes a brief cameo in Willa Cather’s My Antonia.

In Dumas’s story, the title “Camille” refers to Marguerite’s signals to her lovers: when she is menstruating she wears a red camellia, however when she is available to her lovers she wears a white camellia, her favorite flower. The story is narrated after the death of Marguerite by two male narrators, primarily Armand Duval (the voice of Dumas). Armand believes she left him for another man, and only later realizes the truth. She does not die in his arms, as the film tragically portrays. In the story, Marguerite dies alone and in suffering, filled with regrets for what might have been.