Georges Seurat (pronounced “George Sir-rah”) was born in Paris. His father grew wealthy from various real estate speculative investments. He studied art as a young man and developed refined sensibilities, as well as mathematical precision in his works. 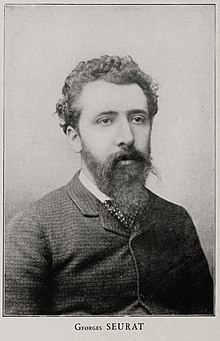 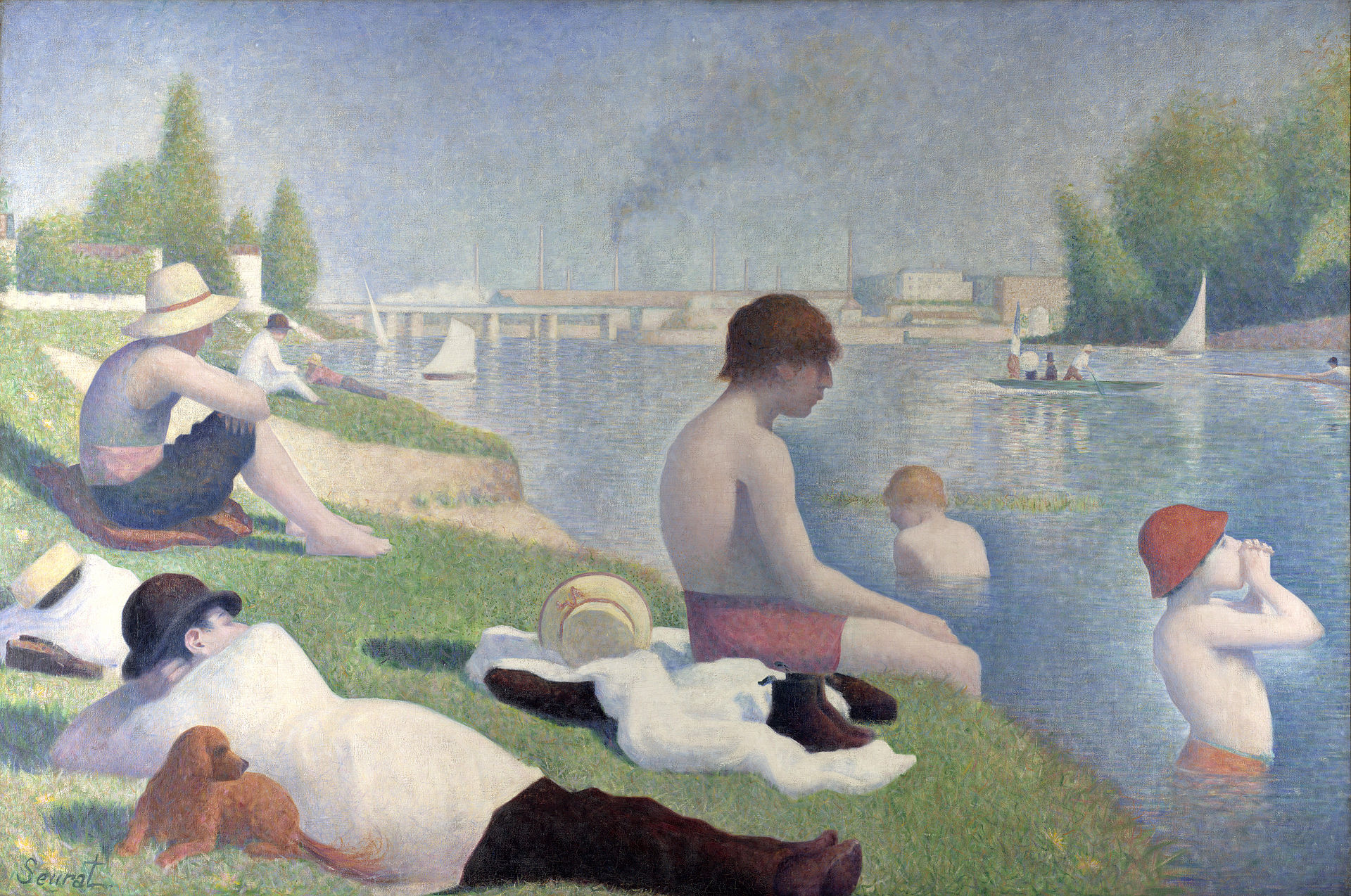 Bathers at Asnières (1884) -an orderly scene of friends enjoying a day on the Seine. It was rejected by the Salon, and not particularly well regarded until after his death. Various portions of the painting appear blurred and hazy. All figures appear static and pensive, excluding the boy in the water. The canvas is massive and predated his other large, famous work. 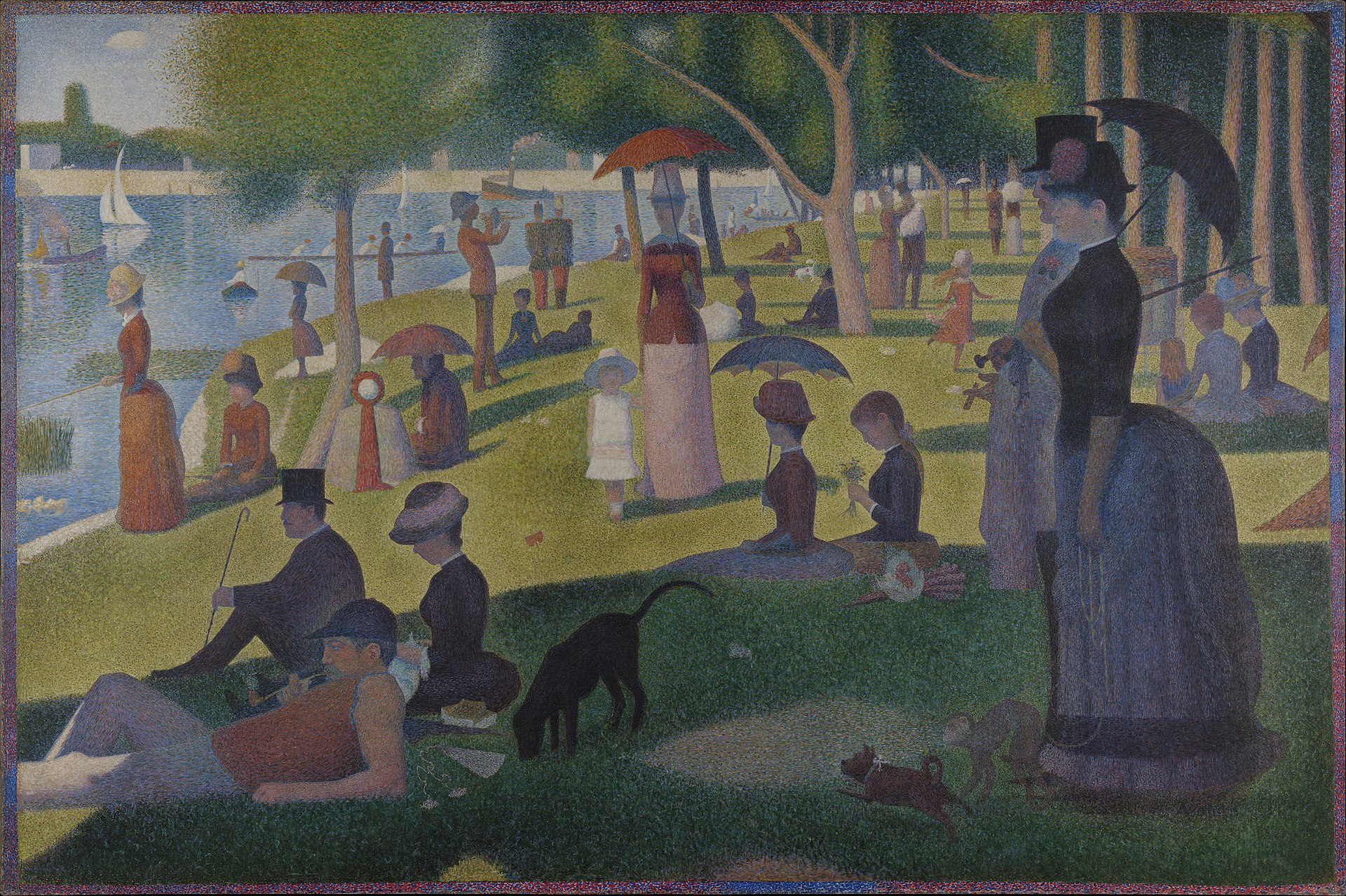 A Sunday on La Grande Jatte (1884-1886) -surely Seurat’s most famous painting, completed on a massive canvas. It was displayed with the Impressionists. The painting portrays a number of stoic Parisians enjoying a day on the Seine. Only one figure appears to gaze straight at the audience -a young girl in the center of the painting. The rest of the people are solemnly staring at the riverbank. Note the shadowing -many of the people sit in the shade of a huge tree. The painting is contrasted with his previous “Bathers” painting, which portrays working class people on the opposite bank who sit in the sun without shade while factories emit in the background. The boy on the opposite bank in the previous painting appears to be calling across the bank. Seurat had a bit of a revolutionary spirit in him.

Models (1886) -a response to his critics who found Seurat’s works to be too cold in the pointillist style. His most famous painting stands in the background.

The Circus (1891) -an unfinished painting at the time of his death. It was the last ambitious painting he attempted before his untimely death. It may be considered a part of a series focused on the theme of the circus including the following two paintings:

Seurat died of a mysterious ailment at the age of 31 at his parent’s home. He secret girlfriend and model was pregnant with their second child. She died during, or shortly after, the birth.

Paul Signac (pronounced “seen-yahk”) was a trained architect in Paris. When he was young, he was highly influenced by Monet’s exhibitions. Thus, when Signac traveled around coastal Europe, he painted his surroundings. He met Seurat and Monet, and particularly struck by Seurat with whom he became friends. Together, with Georges Seurat and others, they founded the Société des Artistes Indépendants in Paris. Matisse later became a noted member. Signac painted with van Gogh, as well.

Signac was something of a radical, being taken in by anarchism. He supported many of his friends -he was the first person to purchase a Matisse painting. 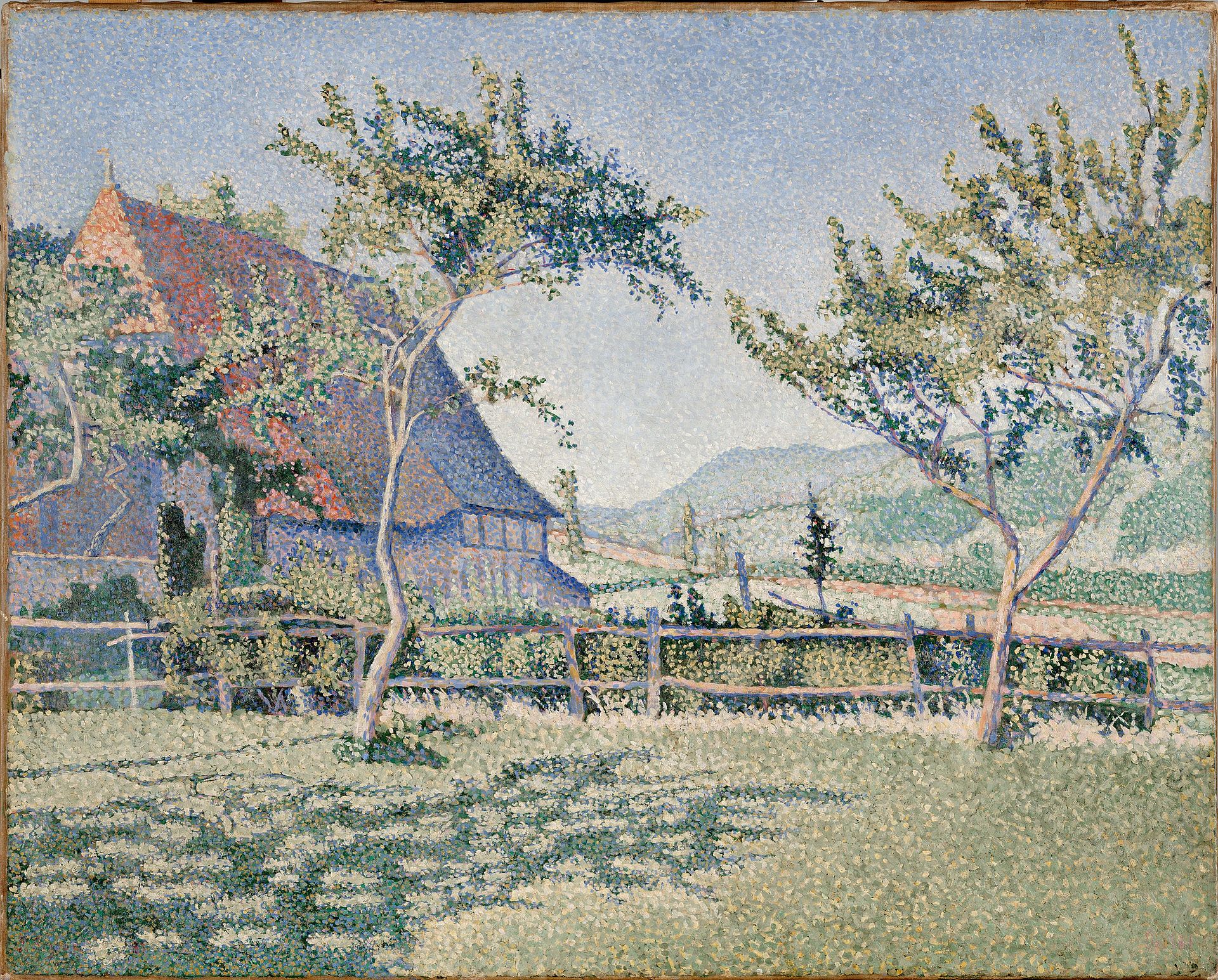 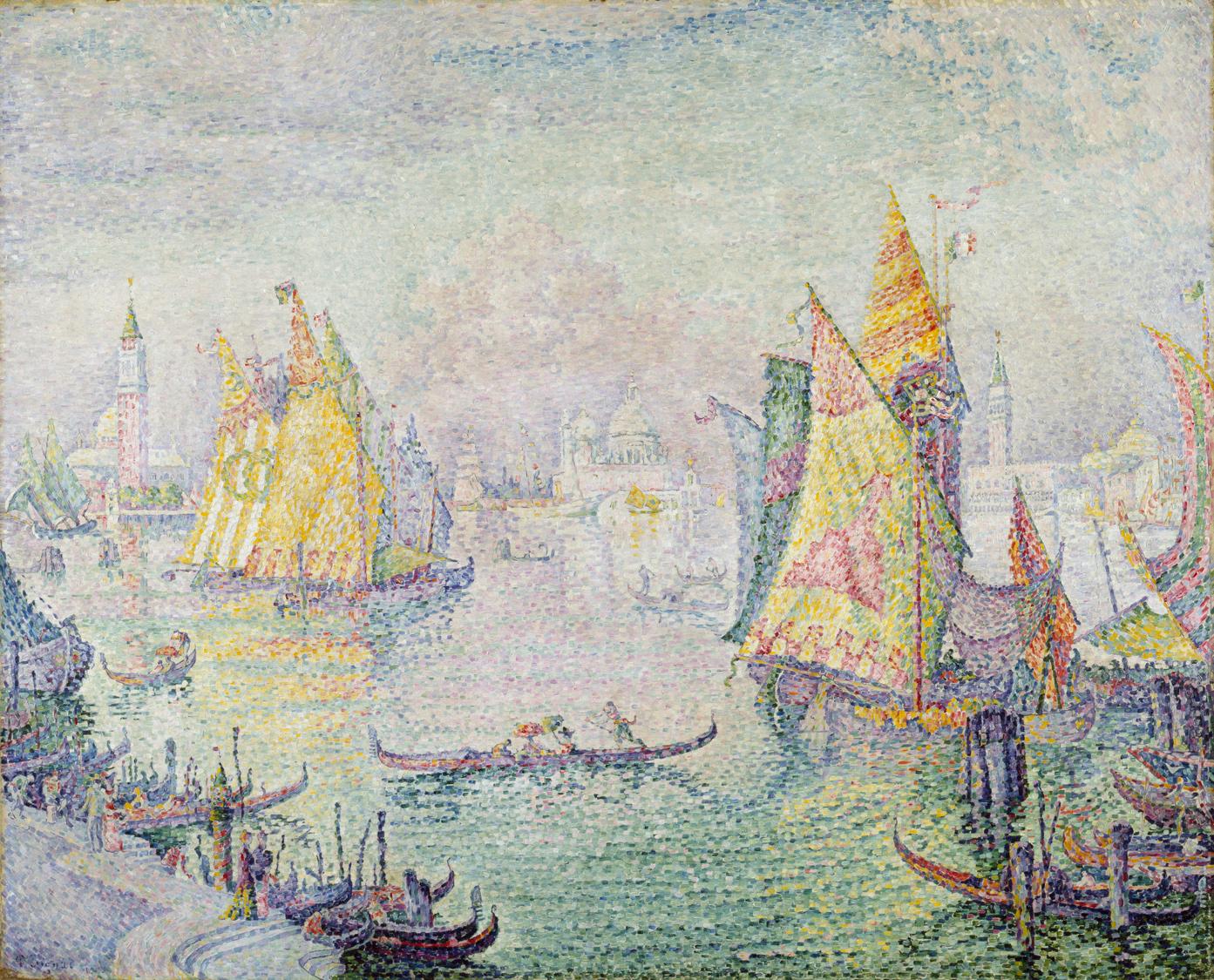 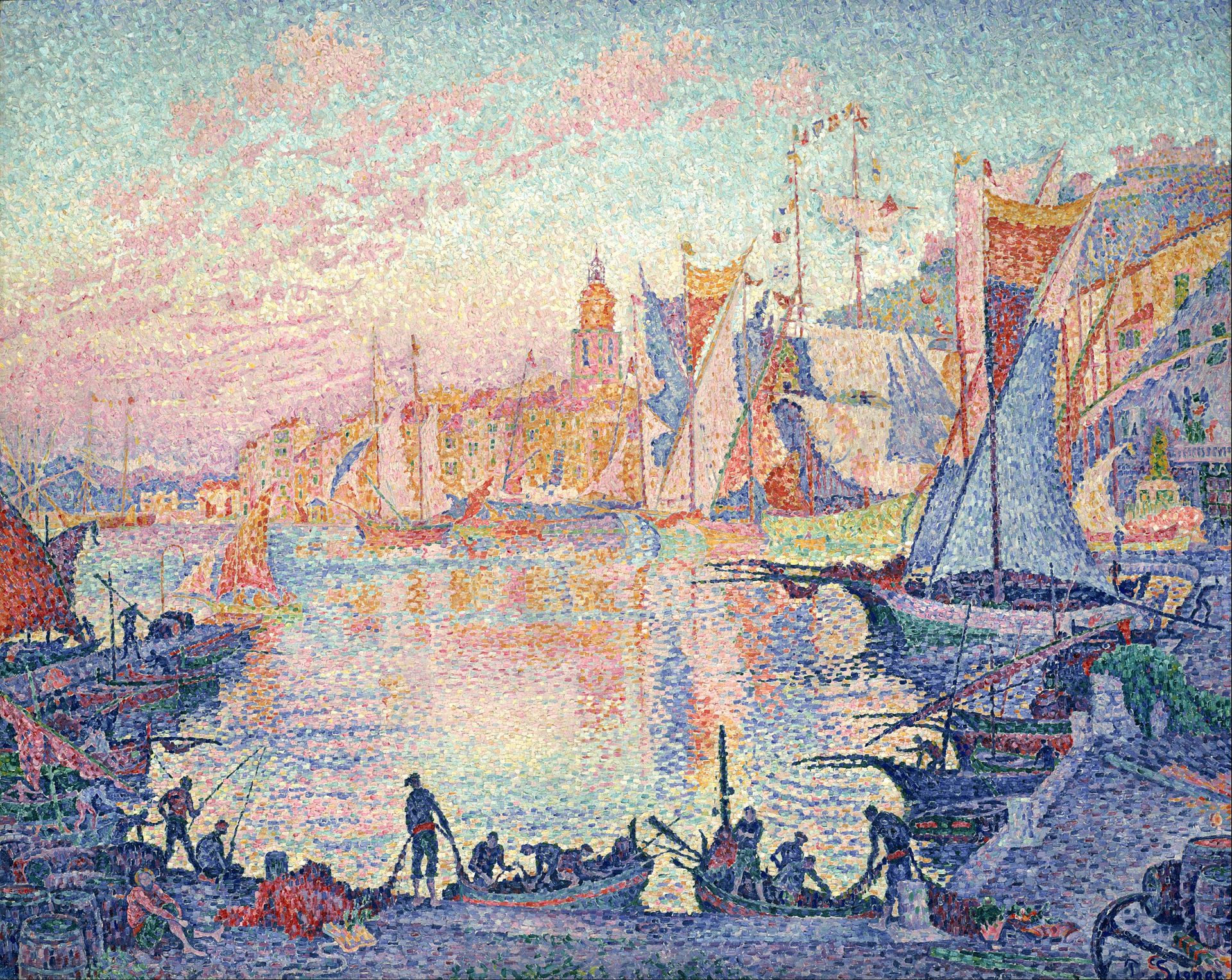 Signac was an intellectual. His writings influenced later “Post-Impressionist” painters. He was Seurat’s most ardent defender. Signac died in 1935 of Sepsis at age 71.