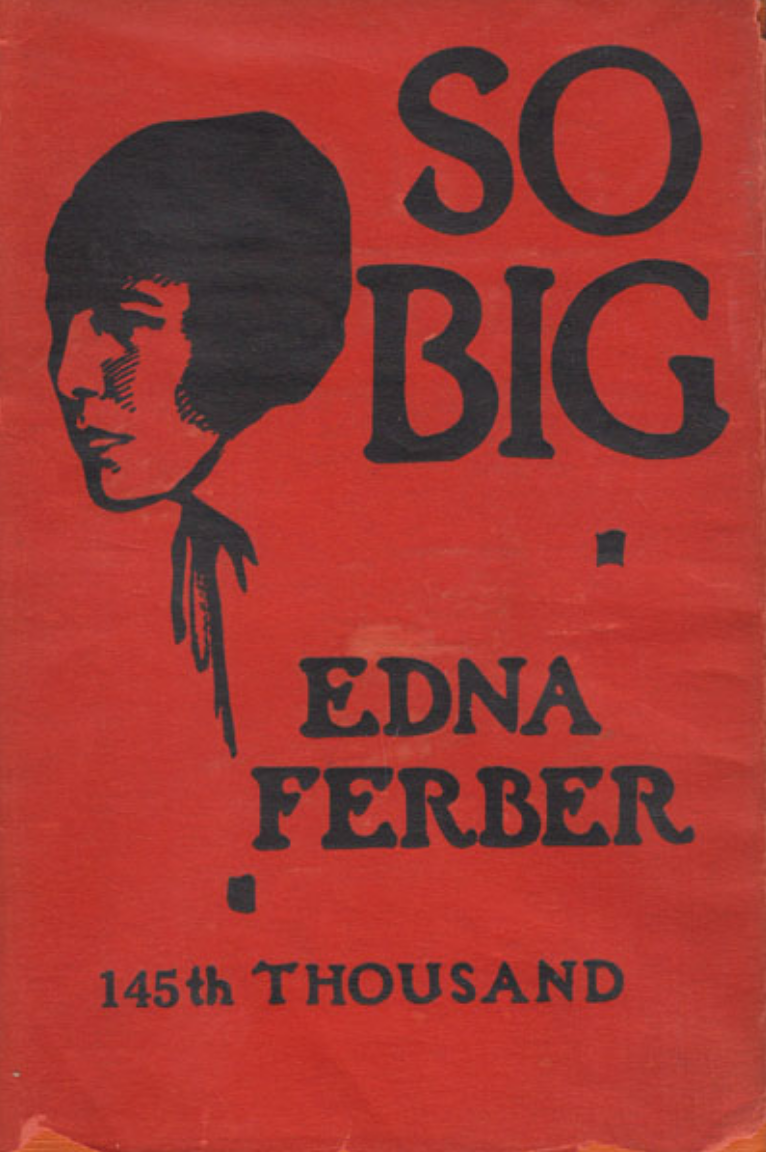 So Big by Edna Ferber is going to take some time for me to mull over. It was an enjoyable novel, albeit scattered. It was published in 1924, and won the Pulitzer in 1925. It is a novel that strives to find beauty in the ordinary, and it seeks to expose the new capitalist class for its empty pursuit of money alongside happiness, ultimately finding neither. It is a novel that strains the tension between city and country, between Chicago and the farm. The story is very loosely based on the life of Dutch immigrant, Antje Paarlberg (a famous immigrant from the Netherlands who fled his native country as a result of high taxes, a progressive state church, as well as blight and disease among the nation’s crops).

The first half of the book tells the story of Selina Peake, a fun-loving girl who is raised by her loving but gambling father. They travel throughout the United States until his death when she moves to the high prairie in Illinois (based on South Holland, Illinois). She takes a job as a country school teacher among the midwest Dutch immigrant community. She is clearly out of place. She initially moves to the Illinois farmland so she can save up enough money to move to the city of Chicago- where the world is bright and exciting! However, Selina soons finds the rolling farmland beautiful, even the cabbage fields of Illinois. She notices a shy boy named Roelf Pool -an artistic boy to whom she gives reading lessons. On one dramatic night at a local musical, the town begins ‘bidding’ on the young and eligible ladies. All the men clamor for Selina, much to her surprise, until a quiet but strong and tall widower named Pervus DeJong wins her with what little he owns. Selina begins giving him reading lessons, and soon they fall in love and are married. Meanwhile, Roelf Pool flees the country for France to pursue an art career -Selina weeps for joy for Roelf, her first crush. It is bittersweet.

In the second half of the book, Selina gives birth to a boy -Dirk DeJong. Everyone asks her ‘how big is the baby?’ to which she responds ‘S-o-o-o-o big’ -hence the nickname of her son “SoBig” and the title of the novel, though Dirk is not actually a large boy. Years go by and their little farm struggles. One day, Pervus comes home from selling their vegetables in Chicago. He falls ill and dies, leaving Selina all alone to tend to her farm. She starts making different farming and business decisions -traveling all alone to the bustling Haymarket Street in Chicago to sell her vegetables. Eventually her asparagus finds a market in the city, and the farm becomes successful. She sends Dirk away to College so that he may be educated in all things refined and beautiful (at today’s University of Chicago). When he leaves, he becomes an architect in Chicago, with dreams of building big and beautiful structures, like the elegant classical structures of Europe, but he soon becomes swayed into a financially successful career as a bond salesman. He is urged to make the change by Paula, a married woman who loves Dirk. After all, she says to Dirk, where is the utility in beauty? You can make just as much money working out of a box as a cathedral.

Selina becomes distraught at her son and his rejection of his architectural career. He has neglected beauty and art, for an empty life of American capitalism. His firm focuses on selling bonds to widowed or single women, who do not know otherwise. The time period is the height of the economic expansion -the Gilded Age -the age of loose credit and plenty of money. He eventually falls in love with a young and carefree artist, Dallas, but Roelf Pool comes to Chicago to visit with an old European general, and they all decide to visit the DeJong farm outside the city. Dirk feels out of place as both his mother and Dallas clearly love Roelf and his life in Europe. Roelf’s hands are rough from years of his craft. When she was young, Selina’s father used to say there are two kinds of people: wheat and emerald. Selina says Roelf is emerald, Roelf says Selina is wheat -both beautiful. Dirk “SoBig” DeJong returns to Chicago, dejected and alone.

Selina is the hero of the novel, and Ferber asks us to contrast her successes with Dirk’s choices. Selina is the innovative, free-spirited, lover of beauty. She does not listen to the popular mythology of wealthy urban life. She pursues her own success and happiness, finding both, while Dirk is sadly absorbed by the passing wave of glamour (bond-selling in Chicago). Still, Selina is a complex character. As a young and carefree woman, she is open to all the world has to offer, and as a consequence she winds up living a life that she did not plan for -a struggling farmer’s wife, and then a widow. Yet she is happy. In Ferber, we find the American dream in something simple -appreciating the beauty of the rows of Midwest cabbage plants, or the successful harvest of asparagus. Yet it is complicated. As with other early winners of the Pulitzer, So Big, addresses the issue of change in American life -changing technology, trends, Zeitgeist, progress, and so on. Yet it reaffirms that hope and happiness can prevail.

Apparently there was a minor controversy among the members of the Pulitzer board about whether or not to split the award in 1925 between Edna Ferber’s So Big and Balisand by Joseph Hergesheimer. Eventually they settled on So Big, and today Joseph Hergesheimer is largely forgotten. Ferber once called So Big a “theme” and a “story on the triumph of failure.” In hesitation about getting the book published Ferber once wrote: “Who would be interested in a novel about a middle-aged woman in a calico dress with wispy hair and bad teeth, grubbing on a little truck farm south of Chicago?” But nevertheless Doubleday loved the book, and it sold hundreds of thousands of copies in the first year of publication alone.

Who Is Edna Ferber? 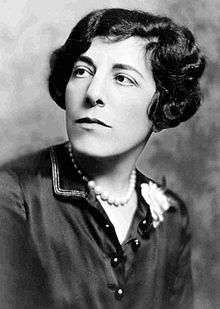 Edna Ferber (1885-1968) was once one of the more popular names in American literature. Her most notable books include So Big (published in 1924 and Pulitzer Prize winner in 1925 -it was also made into a silent film in 1925 and several remakes followed throughout the years), Show Boat (1926, a multi-generational story of a traveling theater steamboat as it floats along the Mississippi River during Reconstruction, the Gilded Age, and up to the Jazz Age -it was later made into a successful musical), and Cimarron (1929) -the story of a family during the Oklahoma Land Rush in the Cimarron Territory where they build a successful newspaper company. It was made into an Academy Award film in 1931 (and again in 1960), though I must say the 1931 film is forgettable at best, another miss for a ‘Best Picture’ winner from the Academy.

Edna Ferber lived through the development of the west, traveling frequently due to her father’s blindness and line of work. She lived all throughout the Midwest and her mother was forced to take on work, as a result of their father’s illness, and this left the children to be raised by “hired girls” like Willa Cather’s famous bohemian, Ántonia. She was raised in a Jewish family, and she worked at various newspapers after abandoning her dream of being an actor. She faced considerable anti-semitic discrimination during her lifetime, and this is reflected in some of her works, but she was through and through a lover of American and Americans. After winning the Pulitzer, she floated in literary circles in New York City and gained quite a following, including Theodore Roosevelt, among many others.

Ferber never married and she had no children. She died of stomach cancer at her home in New York City at the age of 82.

Here are some notable passages from So Big:

“In his way and day he was a very modern father. ‘I want you to see all kinds,’ he would say to her. ‘I want you to realize that this whole thing is just a grand adventure. A fine show. The trick is to play in it and look at it at the same time.’
‘The whole thing?’
‘Living. All mixed up. The more kinds of people you see, and the more things you do, and the more things that happen to you, the richer you are. Even if they’re not pleasant things. That’s living. Remember no matter what happens, good or bad, it’s just so much’ -he used the gambler’s term, unconsciously-‘just so much velvet.’ (page 6 -Selina’s father speaking to her).

“She was aware of a kinship with the earth; an illusion of splendour, or fulfilment. Sometimes, in a moment’s respite from her work about the house, she would standing the kitchen doorway, her flushed face turned toward the fields. Wave on wave of green, wave on wave, until the waves melted into each other and became a verdant sea” (page 71).

“More than ten years ago she had driven with Klaas Pool up that same road for the first time, and in spite of the recent tragedy of her father’s death, her youth, her loneliness, the terrifying thought of the new home to which she was going, a stranger among strangers, a warm little thrill of elation, of excitement – of adventure! That was it. “The whole thing’s just a grand adventure,” her father, Simeon Peake, had said. And now the sensations of that day were repeating themselves. Now, as then, she was doing what was considered a revolutionary and daring thing; a thing that High Prairie regarded with horror. And now, as then, she took stock. Youth was gone, but she had health, courage; a boy of nine; twenty-five acres of wornout farm land; dwelling and out-houses in a bad state of repair; and a gay adventuresome spirit that was never to die, though it led her into curious places and she often found, at the end, only a trackless waste from which she had to retrace her steps painfully. But always, to her, red and green cabbages were to be jade and burgundy, chrysoprase and porphyry. Life has no weapons against a woman like that” (page 97).

“‘Yes. All the worth-while things in life. All mixed up. Rooms in candle-light. Leisure. Colour. Travel. Books. Music. Pictures. People -all kinds of people. Work that you love. And growth -growth and watching people grow. Feeling very strongly about things and then developing that feeling to-to make something fine come of it…That’s what I mean by beauty. I want Dirk to have it'” (page 123 -Selina’s idea of beauty for Dirk).