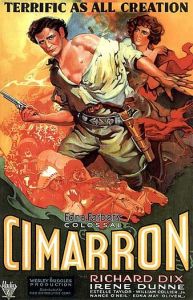 Named after Edna Ferber’s 1930 popular novel of the same name, Cimarron is the oscar-winning film that was RKO studio’s most expensive film to date. (You can also read my reflections on Edna Ferber’s Pulitzer Prize winning novel, So Big here). Cimarron was the first film to receive more than six academy award nominations. It was also the first “western-esque” movie to win Best Picture at the Academy Awards. It was filmed on a large ranch in 1930 outside of Los Angeles.

Cimarron is a poor film loaded with tired clichés and spotty acting. As a major award-winning film, Cimarron is one of the first in a long line of movies, once honored by the Academy for their day, but now are nearly forgotten. If I had the opportunity to do it over, I would not have seen this film and would not recommend it. Watching it is like slogging through a long and droning soap opera. It was not a financial success in 1931, but it was critically lauded. At least the great composer Max Steiner completed the score!

The plot follows a young man named Yancey Cravat (played by Richard Dix, an early film star best known for this role) during the Oklahoma land rush. It trails his adventures as he falls in love and marries a young woman named Sabra (played by Hollywood Golden Age actress, Irene Dunne). Yancey is tricked by a prostitute named Dixie (played by silent film star Estelle Taylor) so he moves his family to a small fictional town called Osage, an unruly place in its early pioneer days. The town grows due to the oil boom and the controversial presence of the Cherokee causes friction as Westward expansion continues. Yancey, the main character, starts a muckraking newspaper but he becomes restless. They have children together and get involved in local politics until Yancey abandons his wife and children in search of new adventures. In the end, Yancey and Sabra are briefly reunited before he dies.