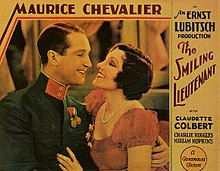 The Smiling Lieutenant is a delightful musical and comedy film -it is light-hearted and sentimental. The Smiling Lieutenant is clever and, at times, absurd, but it is a beautifully made film. The story is taken from an Oscar Straus opretta, which was based on a German novel. It was the first of three films directed by Lubistch starring Mirian Hopkins, the others being Trouble in Paradise and Design for Living.

In Vienna, a French officer meets and falls in love with a beautiful young jazz orchestra performer (stealing her affections away from another Viennese officer). While standing at attention during a welcome parade for the king and princess of Flausenthurm (a fabricated small European kingdom that no one seems to be able to spell correctly), he winks at his lover just as the motorcade for the princess passes. The princess sees his smiling and winking and she becomes gravely offended, causing a national uproar. Thus the French officer is called up to explain himself at the palace, and nervous he claims that the princess is so beautiful hence why he was smiling and winkins, so she falls in love with him and he is forced to marry her (out of national and political necessity). However, he remains true to his jazz band lover. After a period of struggle, his lover comes to the palace, unbeknownst to him one day, and she helps the princess loosen up (“jazz up your lingerie”), and in the end it works, the young french officer becomes attracted to his wife. He winks at the audience as he closes their bedroom door. The “Lubistch touch” in this film is that in the end, the film is a joke -the wrong girl gets the man (the audience keeps anticipating a reunion with his jazz band lover).

It was nominated for an Academy Award for Best Picture. The lead actor, Maurice Chevalier, explained that the tension on set was high for this film, and that his smiling and winking were coping mechanisms for the recent death of his mother.