The Girl With The Dragon Tattoo (2011) Director: David Fincher 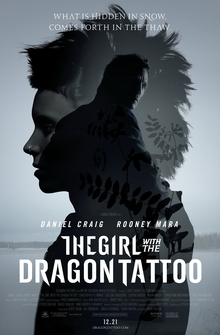 Fittingly, this dark and gritty Fincher film falls in line with the modern yearning for less cliche and hopeful main characters, and more sinister plot-lines. The story is based on the famously best-selling novel series by Stieg Larsson. The film stars Daniel Craig and Rooney Mara (sister of Kate Mara). Mara was nominated by the Academy for Best Actress for her performance.

The film takes place in Sweden. A disgraced journalist is being sued for libel by a wealthy businessman. Suddenly, an odd researcher and hacker, Lisbeth Salander, appears offering detailed information on the plaintiff, in exchange for his promise to dig into a 40-year old murder mystery story that had gone cold, on behalf of another wealthy man. He leaves to live in a rural cottage, while Salander is given a new brutally controlling state appointed guardian who assaults her. She secretly records one of their meetings, then she turns the tables on him attacking him in graphic ways, eventually tattooing “rapist pig” on his chest and extorting him for money in exchange for her silence. The events lead our lead investigator and Salander to uncover a terrible abuse and murder plot that had been happening for years, when they confront the villain in the end. At the conclusion, Salander helps to hack the original plaintiff’s bank account and drain it, causing his death. She shows up at the investigators door, only to find that he has re-engaged his old romance. She throws a gift she brought for him into the trash and rides away on her motorcycle.

A Swedish version of the film, which is also excellent, was released in 2009. As with The Social Network Fincher recruited Reznor and Ross to complete a unique soundtrack.

Despite excellent performances by Craig and Mara (particularly Mara), the film is dark, bleak, and depressing. Its subject-matter is all-too common in our day and age, in a greying world of moral ambiguity, wherein good men are hard to come by, and brutally aggressive men rule the world. The theme is tired, but the film is excellently executed, like its Swedish counterpart.