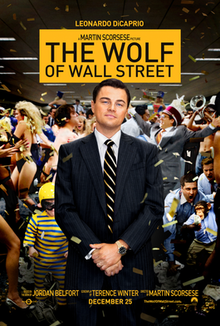 A different kind of crime film, The Wolf of Wall Street tells the story of rampant misconduct on Wall Street. It plays on public sentiments toward New York’s indulgent and much-maligned financial district (for good reason). This was Martin Scorsese’s fifth collaboration with Leonardo DiCaprio.

The film is a cocaine-fueled binge that examines the grotesquely indulgent life of Jordan Belfort, a mostly true account of the founder of a brokerage firm on Wall Street in the late ’80s and early ’90s. He rises from being a clever salesman of penny stocks, to becoming the founder of an explosively successful firm that deals in illegal trades. He hides his money in a Swiss bank account, gets married, gets divorced, gets married again, divorced again, takes an incredible amount of drugs, sleeps with prostitutes, and so on until he and his partners start turning on each other to the FBI. He serves a minor sentence in a high-brow prison and he then re-enters the workforce conducting seminars on the technique of selling. The real Jordan Belfort appears at the end of the film to introduce the character of Jordan Belfort.

There was a controversy about financing for the film (ironically) -apparently financing may have come from stolen funds in Malaysia. As a Scorsese movie it was, naturally, nominated for a variety of awards. Lamentably, Jordan Belfort made approximately $1M on the movie rights. Apparently DiCaprio was paid $10M, while Jonah Hill was paid approximately only $60K for the film.

There are elements of Scorsese films I find agreeable -excellent plots, something unique in our era, and allusions to classic film history- however I find his taste for the incredibly vulgar and profane to be bewildering. Indeed, The Wolf of Wall Street set a record for the most instances of swearing in a film at the time. Scorsese apparently had to edit down the film’s gratuitous nudity and sexual content to ensure its R-rating, rather than a projected NC-17 rating. It’s difficult to discern whether or not the film is celebrating the hedonistic and lawless life of a Wall Street executive, or if it is criticizing the lifestyle and exposing its corruption to the public.