Snow White is the first feature-length Disney cartoon film. It is one of the great Disney films, and also (in real terms) it still stands as the most financially successful animated film of all time. It was nominated for Best Musical Score, and the following year in 1938 Walt Disney was awarded an honorary Oscar by Shirley Temple. For the film, Walt and Roy had signed with RKO. 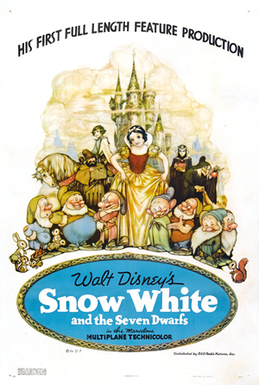 The story is based on the Brothers Grimm fairytale. A young girl, the fair Snow White, escapes her jealous stepmother, the Queen, who has been asking her magic mirror: “who is the fairest one of all.” When the mirror responds that it is Snow White, the Queen orders her huntsman to kill Snow White and return her heart in a box. At the last moment, he gives in and warns Snow White. She flees deep into the fearful woods, and guided by friendly woodland animals, she comes upon a filthy, dusty cabin. She cleans it up and the seven dwarfs who work in the mines return home to a series of amusing gags. Meanwhile, the Queen discovers that Snow White is alive, so she takes the form of an old hag and brings a deadly poisonous apple to Snow White. She takes a bite and collapses and the dwarfs chase the disguised Queen to a mountaintop and at the last moment, lightning strikes sending the Queen to her death. In the end, a prince, who sang from afar to Snow White at the outset of the film, visits her open burial and kisses Snow White, magically bringing her back to life.

The real German folk story that was compiled by the Brothers Grimm was called “Schneewittchen.” In the original Germanic story, the Queen gives birth to Snow White but dies in childbirth. The King marries again and the new Queen is vain and spiteful of Snow White. From here, the story follows the plot of the film, however the queen takes on several different forms and tries to kill Snow White in other ways until the poison apple is used. The prince stumbles upon on Snow White and one of his attendants trips and bumps her throat which dislodges the poison apple. They get married and the Queen attends the ceremony but the prince has her don some red-hot slippers and dance until she dies from it.

Another beautiful element of the film is the use of song to tell the story: “Someday My Prince Will Come” and “Heigh Ho” and “Whistle While You Work” are now classic musical numbers.

The film is unique as it portrays its cartoon figures with a sense of realism, and rejected the caricatures so common in cartoons of the time. Disney knew that audiences might not connect in the same way to a film like Snow White, in the same way they had with the ‘Silly Symphonies.’ The drawing, sound, and also pioneering film technology (see the scenes of Snow White singing into the well, or the scene of the Queen taking her form-altering brew in which the camera creates the allusion of spinning around the room. They used a multi-plane camera technique to capture the depth to scenes (blurring the object closer in production while drawing attention to the scenery in the background). 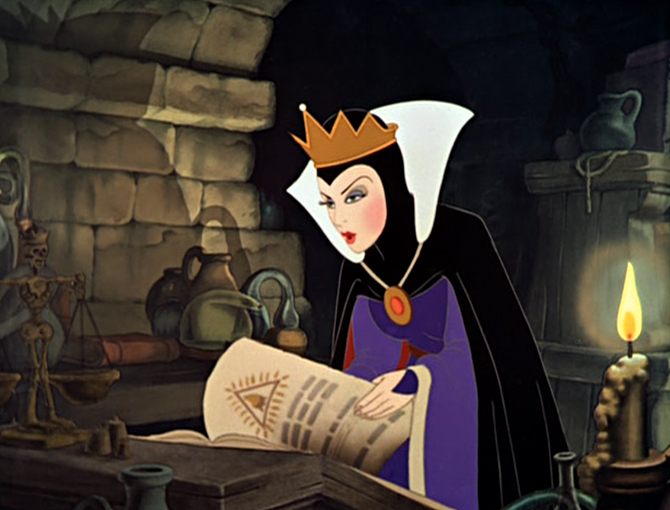 The idea for creating the film was met with hostility from the get-go – both  Walt’s brother and business partner (Roy) and his wife tried to persuade him against making the film. The cost to finance the film was massive, over $1M which in the ’30s was an unheard of number for a cartoon. Hollywood executives referred to the film as ‘Disney’s folly’ during production. Walt even had to mortgage his house to help pay the cost. The animators, meanwhile, introduced so many sequences for the dwarfs that had to be cut (even now the dwarf scenes occupy the overwhelming bulk of the film). The animators were provided with many live-action actors to create the scenes in the film. However despite all the challenges, the film was a wild success.

Snow White is an incredible film – monumental, innovative, beautiful, and a captivating but simple story based on a classic of Germanic literature. Walt Disney risked a great deal to bring this film to life and it was all to our benefit. This is a terrific film.