Rembrandt was born in 1606 in the Dutch Republic (no the Netherlands) to a miller and a baker’s daughter. Since much of his artwork has had such religious influence, Rembrandt’s mother was a Roman Catholic and his father was a member of the Dutch Reform Church.

Rembrandt grew up in Leidin, a little college, mill town that lay directly along the Rhine River (hence “van Rijn”). As a young boy, Rembrandt attended Latin school and was adept at painting, however while some young apprentices left for Italy to study the greats, Rembrandt never left the Dutch Republic in his life. Rembrandt became the defining painter of the “Dutch Golden Age.” He became the master of darkness and lightness, portraying many mythological and biblical scenes in his paintings. 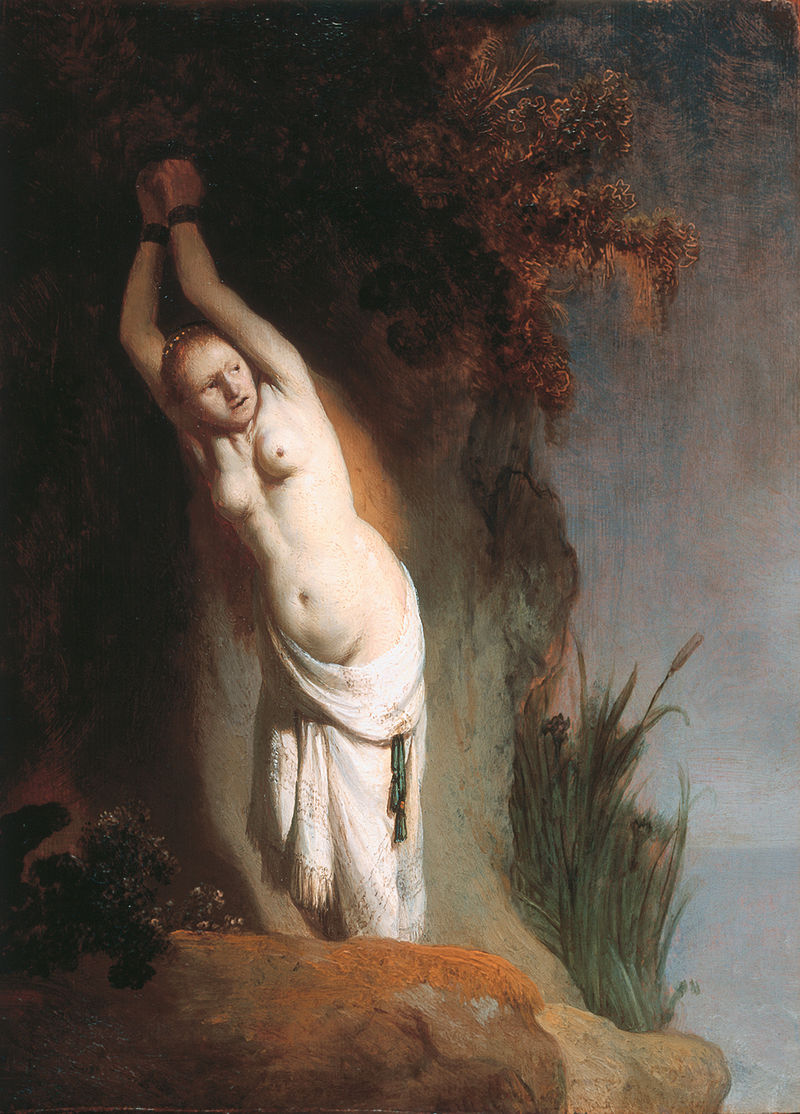 Andromeda Chained to the Rocks (1630)

Rembrandt moved to Amsterdam as a young painter, which was the central hub of Europe. Amsterdam was formerly a small fishing town that had blossomed into the trade destination of the continent – rare Chinese spices and textiles, maps, books, arts, literature, and all the elements of high culture were present in Amsterdam at the time. As Rembrandt’s portraits began to be purchased, he also began purchasing and trading artwork. However, he was terrible at managing his money, at one point needing to move to a smaller, more modest home. Nevertheless, at his height, Rembrandt ran a large studio employing many students, which has caused great controversy regarding the authenticity of some Rembrandt paintings. 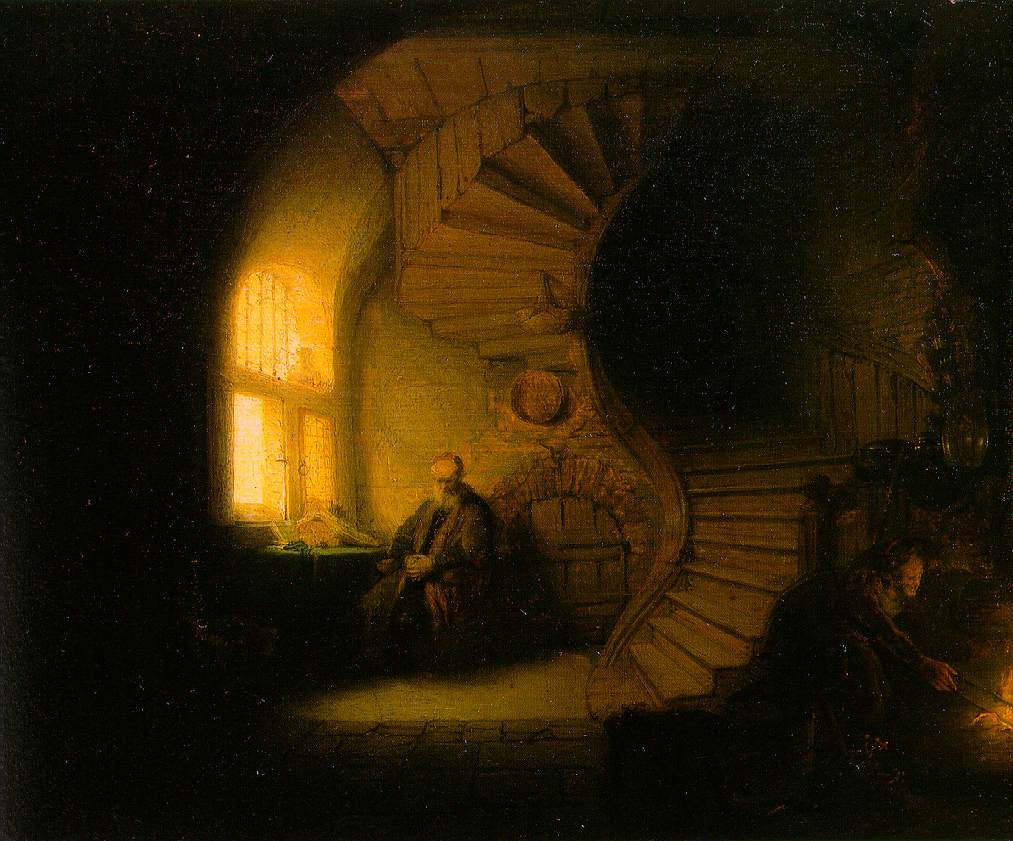 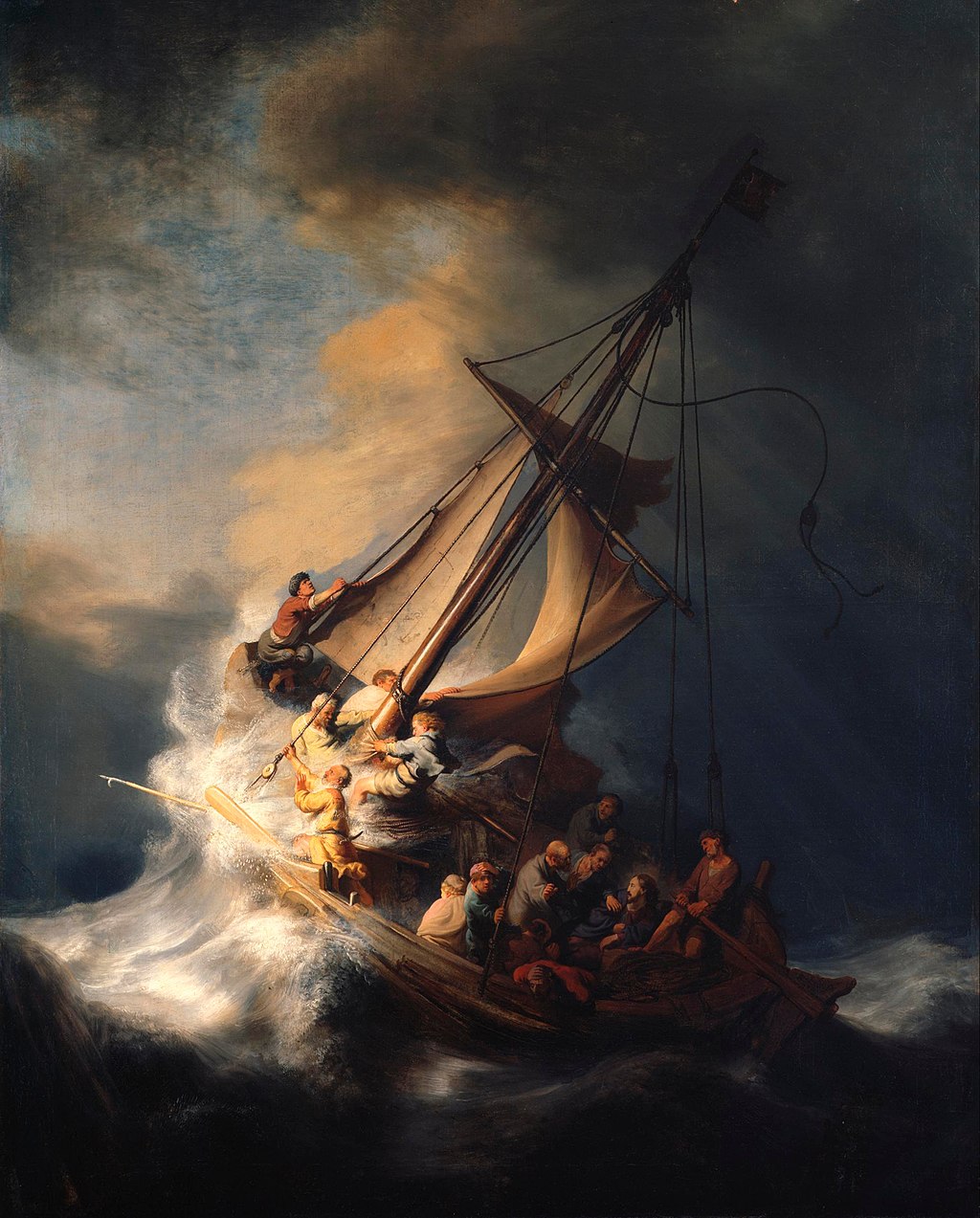 The Storm on the Sea of Galilee, 1633. The painting portrays Jesus’s calming of the sea as told in Chapter 4 of The Gospel According to Mark. The lighting is extraordinary – bold bright light on the left hand-side, while darkness covers the right-side, while Jesus’s head is illuminated. He has just been awoken. One disciple holds onto his hat and stares directly out of the painting at the viewer. Another wretches into the sea, another has his back turned to us, resigned to his fate. Another prays, while others try to tame the crooked and untamed boat. It is a painting of chaos, a tempest. In the story, there are twelve disciples and then Jesus (thirteen) however on this boat are fourteen people. The man staring out at us bears a striking resemblance to Rembrandt, himself. Is the artist commenting on his faith? Amazingly, this painting was stolen in 1990 from the Isabella Stewart Gardner Museum in Boston, MA. Two men disguised themselves as police officers, broke into the museum, and stole this and thirteen other paintings. It has since (as of the time of this writing) not been recovered. This was the largest art heist in U.S. history. In 2013, the FBI announced they knew the culprits, an organized crime group, but there has been little other publicly available information. It remains an unsolved case. It is Rembrandt’s only seascape painting. Today, all that hangs at the museum in Boston today is an empty frame.

Rembrandt married Saskia during his time in Amsterdam. She was the daughter of a political figure and had a great inheritance that they promptly squandered until her death from tuberculosis. He then took more than one mistress. Rembrandt painted many portraits during his lifetime: 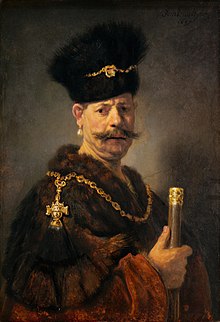 In a letter to Huygens, Rembrandt offered the only surviving explanation of what he sought to achieve through his art: “the greatest and most natural movement,” translated from “de meeste en de natuurlijkste beweegelijkheid.” Rembrandt created over ninety self-portraits, however he also painted himself into many of his historical works, as well. He was also fond of including visual riddles and codes. 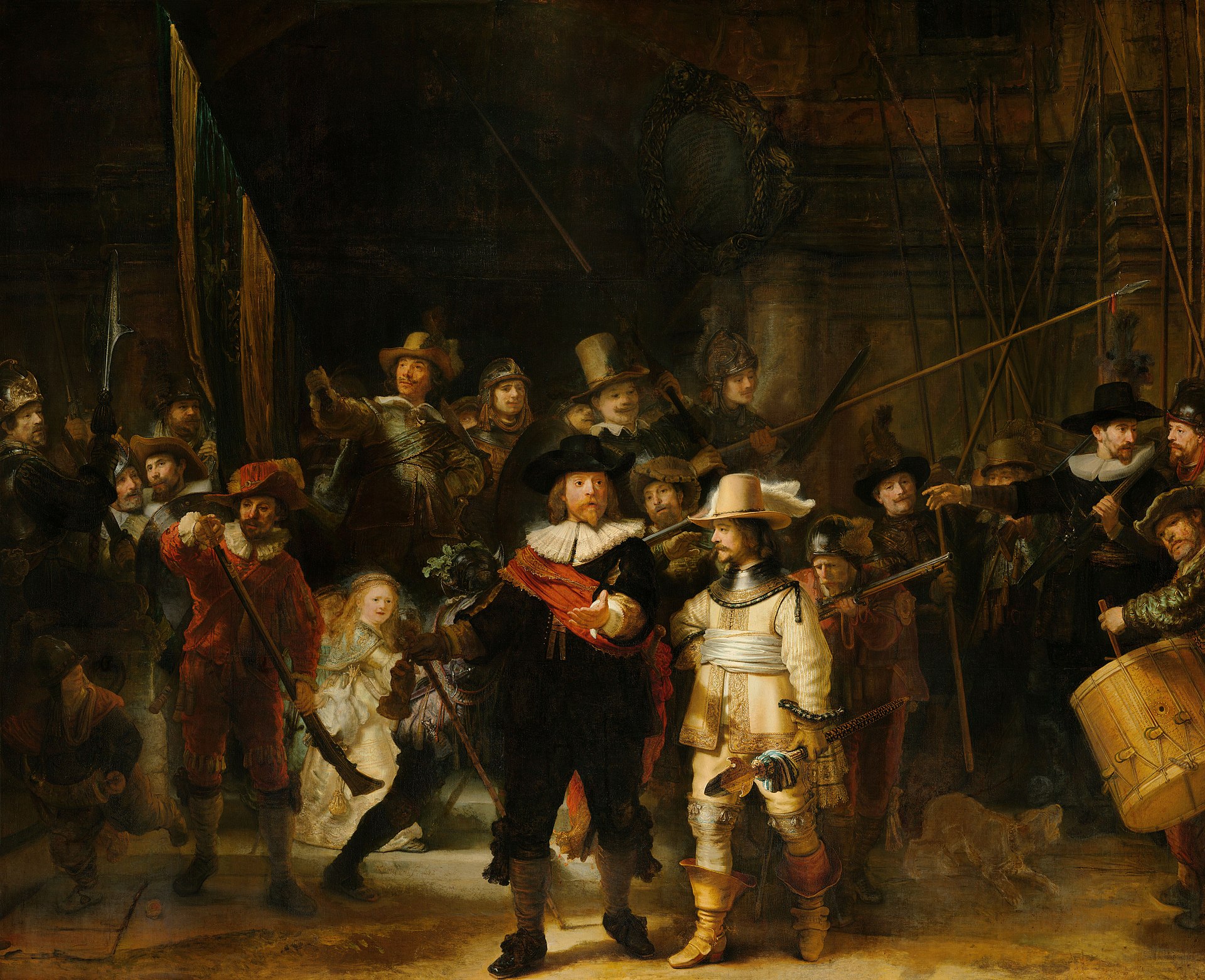 The Night Watch 1642, or “The Militia Company of Captain Frans Banning Cocqt” -it was later dubbed “The Night Watch,” though it was intended to be a daytime scene. The painting has darkened in the few hundred years, making it appear to be night time. It is a massive and explosive painting that should appear to be a Biblical or traditional epic story, but it is of a group of nightwatchmen, protectors of Amsterdam, a militia group that had largely become a ceremonial group by Rembrandt’s time. In fact, men largely had to pay a fee to participate in these groups by this point. The center of the painting is of the captain and his lieutenant, both emerging from the picture. They are the most clear depth of field. The lieutenant and a girl appearing to the left are illuminated by light, and the group is anything but orderly. The motion is calamitous. The painting is a kind of satire of these groups as the looks on each man’s face is dull and appears to be lost in his own world. This type of group would have inspired such tremendous national pride for these men. Three men use guns: on the left, a man loads his gun, one man in the back has just fired his gun (note the smoke), another one the right blows smoke for his gun. Someone is banging a drum, a dog is barking, and the man standing behind the captain appears to be portrayed as a kind of clown. The moment is of chaos, moving into a kind of order for the sake of tradition and national pride. It is a complex moment Rembrandt is capturing of musketeers stepping out from a shaded patio into the daylight. The “Night Watch” marks an end of Rembrandt’s high golden age of success. His commissioner was greatly displeased with the work. 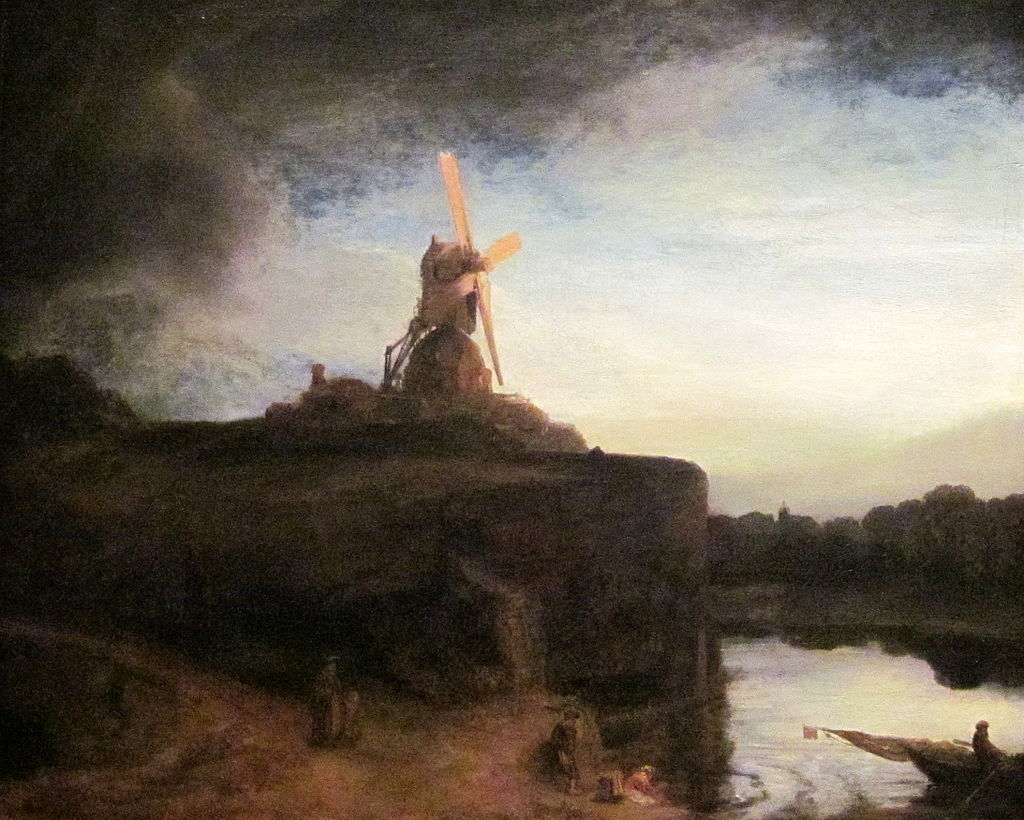 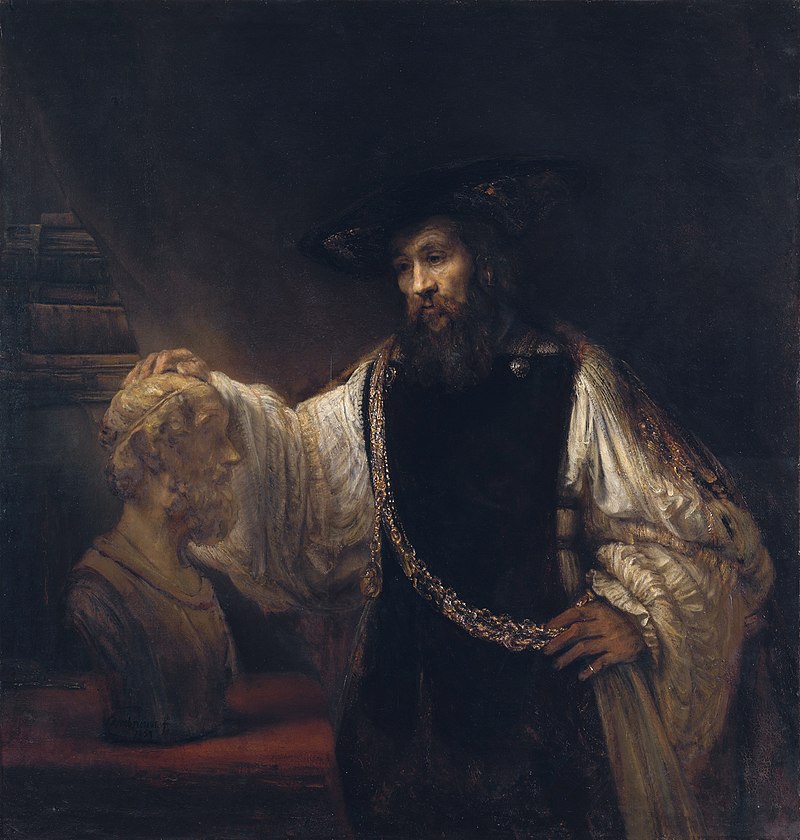 Rembrandt went bankrupt in 1656, partly over a mortgage and an economic recession. He narrowly avoided imprisonment, but his house and all his belongings were auctioned off. Rembrandt died a poor and forgotten man, buried in an unmarked grave of the church. After about twenty yers of burial, his remains were taken away and destroyed, as was common for poor people of the time. He had outlived four of his five children. Many believe Rembrandt struggled with a certain degree of blindness all his life.

Here are some of his self-portraits: 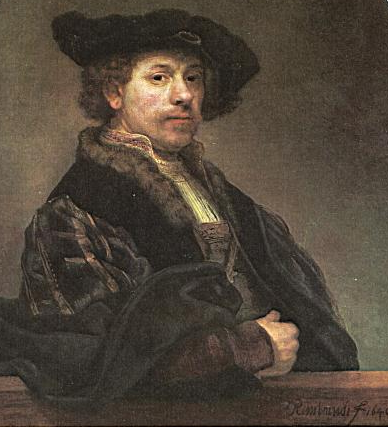 He was also adept at etchings. Here are a few examples: