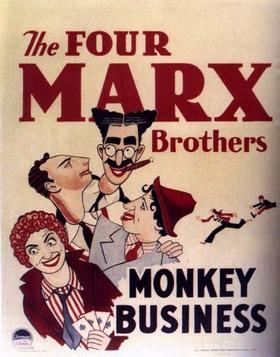 Monkey Business is technically the third Marx Brothers film, after Animal Crackers, though it is the first to feature an original screenplay.

The plot is simple. The Brothers play four hideaways aboard a cruise liner. They try to avoid the ship’s security guards, while accidentally getting involved in rival gangsters aboard the ship. Much of the film is just plotless mayhem. Once the ship arrives in the United States, one of the gangsters kidnaps the others’ daughter, leaving it up to the Brothers to save the day.

The film was controversial among censors for Groucho’s many sexual innuendos, and it was even heavily edited and banned in Ireland. The Marx Brothers’s father Sam Marx (age 72) has a brief background appearance in the film. There are some great songs in the movie, including “Sweet Adeline” which is sung while the Brothers harmonize and hide in some barrels. Originally there was a plan to release a sequel based on the gangster theme, however one of the producer’s sons was kidnapped and killed in a gangster-related raid so they quickly changed course. The next film wound up being Horse Feathers.

Monkey Business is another great Marx Brothers film – one of their best. Here are some of the great Groucho one liners from the film:

“Oh, I know it’s a penny here and a penny there, but look at me. I worked myself up from nothing to a state of extreme poverty.”

“With a little study you’ll go a long ways, and I wish you’d start now.”