Return of the Jedi was another box office smash hit. Like Empire, Lucas financed the film himself. Also like Empire, Lucas hired an outside director, Richard Marquand, a welshman who is today best known for directing Jedi. Several other directors were considered by Lucas, including friends Steven Spielberg and David Lynch. Lawrence Kasdan co-wrote the screenplay with Lucas (Kasdan was a writer on other great films like Raiders of the Lost Ark and several latter and lesser Star Wars films). Originally the film was to be called “Revenge of the Jedi” but this was changed because George Lucas didn’t think it was appropriate for a Jedi to seek revenge. The film employed the use of THX certification for authentic sound quality.

The plot: The Empire is rebuilding its massive Death Star that was destroyed in the first film (episode IV). The emperor is scheduled to visit the new station soon, but they need more men to complete its construction. Meanwhile, Luke, Leia, and Lando have launched a plan to rescue Han Solo from Jabba the Hutt. Leia unfreezes Han from carbon while disguised as a bounty hunter but she becomes enslaved. Then Luke appears and is forced to battle the rancor beast below Jabba’s lair as entertainment. However, he kills the beast so he and Han (who is blinded from carbon freeze) are sentenced to be fed to the Sarlacc pit, a snake-like creature that lives in a hole in the ground in the desert of Tatooine. Luke enacts a daring plan in which he springs into action, revealing his new light saber – a bright green color. Luke is a more confident and capable Jedi in the film, in contrast to his dark and distraught struggles in Empire. Meanwhile, Leia strangles Jabba to death and Han accidentally kills Bobba Fett (a move Lucas later regretted as he didn’t realize how popular Bobba Fett would become). Luke returns to Dagobah hoping to complete his training but he finds Yoda dying as he confirms Vader is Luke’s father. Obi-Wan appears as a ghost to Luke to tell him that Leia is the “other Skywalker” as she is his twin sister. Luke must confront Vader again. Meanwhile, the rebel alliance learn of the new Death Star. They hatch a plan to destroy the shield generator for the new station on the forest moon of Endor. This allows for an all-out assault on the new Death Star. Luke goes to join the rebels on Endor, but he fears he has endangers the mission when he senses Vader’s presence. On Endor, they encounter the Ewok tribal creatures who eventually accept the rebels as allies. Luke tells Leia that she is his sister and that Vader is their father. Luke goes and surrenders himself to imperial troops so that he will be brought to Vader (Luke hopes to be able to turn Vader to the good side again). Then, Vader takes Luke to the Death Star to meet the emperor. It is Luke’s ultimate test. The emperor shows him the power of the new station as it destroys one of the rebel starships. He battles Darth Vader, and this time he beats Vader, severing his prosthetic hand, but he refuses to kill Vader as commanded by the emperor, so the emperor begins torturing Luke with force lightning until at the absolute last moment, Vader heeds Luke’s advice and he throws his master, the emperor, down a deep chasm while being attacked by his force lightning (electrocution). Meanwhile, Han and his crew arrive at the shield generator (thanks to help from the ewoks) and the new station is attacked by the rebels (Lando and Chewbacca and X-Wing fighter pilot Wedge Antilles deliver the ultimate blow to its main reactor). The Falcon flies away from the station along with Luke on a ship with the body of his father, Darth Vader. Just before his death, he asked Luke to remove his helmet and we finally see Darth Vader’s face just before he dies. They all regroup on Endor as Leia and Han embrace and he learns of Luke and Leia’s familial ties, and Luke burns his father, Anakin Skywalker (a.k.a. Darth Vader’s) body on a classical Greek pyre in a sorrowful moment, that is quickly turned to joyful as the whole group of rebels celebrates the decimation of the empire. Luke smiles as he sees the force ghosts of Obi-Wan, Anakin, and Yoda together. 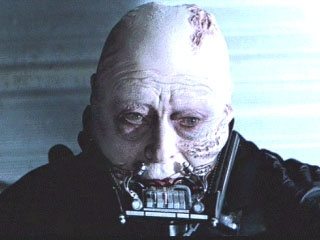 One initial intended ending for the film was to have Luke walk off into the sunset, as an exhausted hero a la a Spaghetti Western, however Lucas opted for a happier ending. Filming for Jedi took place in England, California, and Arizona. Apparently, there was a strict code of secrecy surrounding the production of the film. Harrison wanted desperately for Han Solo to be killed off in Empire, but Lucas demanded that he be brought back into the fore as an essential character. Ian McDiarmid plays the newly introduced character of the emperor, a purely evil figure that looms in the shadows over the first previous films. McDiarmid reprised his roles in episodes I-III as well as more recent Star Wars, and Lucas’s “Special Edition” releases in which he was dubbed into the previous originals. Sebastian Shaw also appears as the aging Darth Vader as we finally see his face as he dies, confessing himself to his son, Luke.

Jedi was always my favorite as a child. The visual effects are absolutely incredible, much like Empire. People tend to criticize the addition of the ewoks (though surely not as terrible as the gungans in episodes I-III). Typically, the criticism questions the notion that a group of cuddly teddy bears could destroy the stronngest attack force of the galactic empire. But nevertheless, the film is a masterpiece (rare for a third sequel of an original cult blockbuster classic). The best scenes in Jedi are due to the incredible effects, as well as the powerfully emotional scenes of dialogue, thanks to Marquand’s directing. Jedi offers a satisfying and entertaining end to the great Star Wars saga (or at least what should have been an end to the saga).

One thought on “Star Wars Episode VI: Return of the Jedi”