Surely, Empire is one of the greatest sequels ever created, on par with The Godfather, Part II. After the unexpectedly explosive success of A New Hope, pressure had risen to create sequels that built on the excitement of the original. Interestingly enough, Irvin Kershner, an independent film director and lecturer at USC (he was a former professor of George Lucas) not George Lucas, directed the film. Instead, Lucas wrote the story and produced the film. Lucas initially hired Leigh Brackett, a science fiction writer, to write the script but he did not like the initial draft and then he suddenly died of cancer so Lucas wrote the script. Kershner spent about three years directing Empire, which became his singular film achievement of his career, and he later turned down the opportunity to direct Return of the Jedi. Lucas sought to liberate himself from the constraints of Hollywood by financing the film all himself, securing approximately $33M in private financing and loans.

The setting of the story is approximately three years after the original. The Rebel Alliance has established a base on the frigid ice planet of Hoth (they were driven from the former base at Yavin IV). The atmosphere of Empire is decidedly cold and dark. The story is unique, different from the original, as Luke experiences tremendous growth and obstacles to overcome. At any rate, Darth Vader and the Empire have regrouped and are hunting down Luke and the rebels by sending out probe droids. On Hoth, Luke goes out to investigate one of these droids, but he is attacked by a wampa snow creature and dragged back to his lair. Luke escapes by using the force, demonstrating his fledgling abilities to the audience. He snatches his lightsaber, cuts himself down, and cuts the wampa’s arm off. As he goes out into the snowstorm, Obi-Wan appears in a vision to Luke, instructing him to go to the Dagobah system to train to be a Jedi under the tutelage of master Yoda. Just then, Han locates Luke and they return to the base together the following morning. Meanwhile, the droid informs the Empire of the location of the rebels. The Empire launches an all-out attack on Hoth that leaves the rebels scattered in near destruction. Han and Leia escape on the Millenium Falcon whose hyperdrive malfunctions so they lead their tailing TIE fighters dangerously through an asteroid field, where they escape in hiding. Darth Vader hires Bob Fett, the bounty hunter, to track the Millenium Falcon. Han and Leia grow together romantically during this period. At the same time, Luke escapes on his X-Wing ship to Dagobah, the swamp planet, to find Yoda. He finds an odd little diminutive creature (played by Frank Oz and created by Jim Hensen) whom he later learns to be the master he is seeking. Yoda is an ancient Jedi master. Yoda reluctantly agrees to teach Luke. Back to Han Solo, once they have escaped the Empire they fly to the Cloud City of Bespin to meet with Han’s old friend, Lando Calirissian (Billy Dee Williams), a questionably trustworthy gambler who betrays the group to Darth Vader via Boba Fett who has been tracking the Millenium Falcon. Back on Dagobah, Luke senses their trouble and he eventually decides to go help them, against the advice of Yoda. Luke’s training has not been complete and he does not have control over himself. Darth Vader, meanwhile, intends to freeze Luke in carbonite. He tries this out on Han Solo, who survives. Darth Vader gives frozen Han Solo to Boba Fett, the notorious bounty hunter, who claims the prize for Han Solo from Jabba the Hutt. At the last moment, Lando has a change of heart. He helps Leia and Chewbacca escape imprisonment but they are too late to save Han. Then, Luke arrives and fights Darth Vader in a dramatic light saber duel that leaves him resoundingly beaten. Darth Vader cuts off Luke’s right hand and famously announces to Luke that he is his father. Emotionally distraught and in disbelief, Luke rejects Vader’s offer to join him, and he leaps down to his near death. He enters an air shaft on Bespin and hangs onto to a suspended antenna. He uses the force to communicate with Leia. She persuades Lando and Chewbacca to turn around and get Luke and they escape in the Millenium Falcon as R2-D2 repairs the broken hyperdrive system. They rejoin with the rebel fleet and Luke’s hand is replaced by a robotic one, and Lando and Chewbacca take the Millenium Falcon, pledging to rescue Han Solo. Thus, the film ends on a dark note as we discover an incredible amount of information about Luke’s past, and the heroes are left in an unfinished moment of despair. 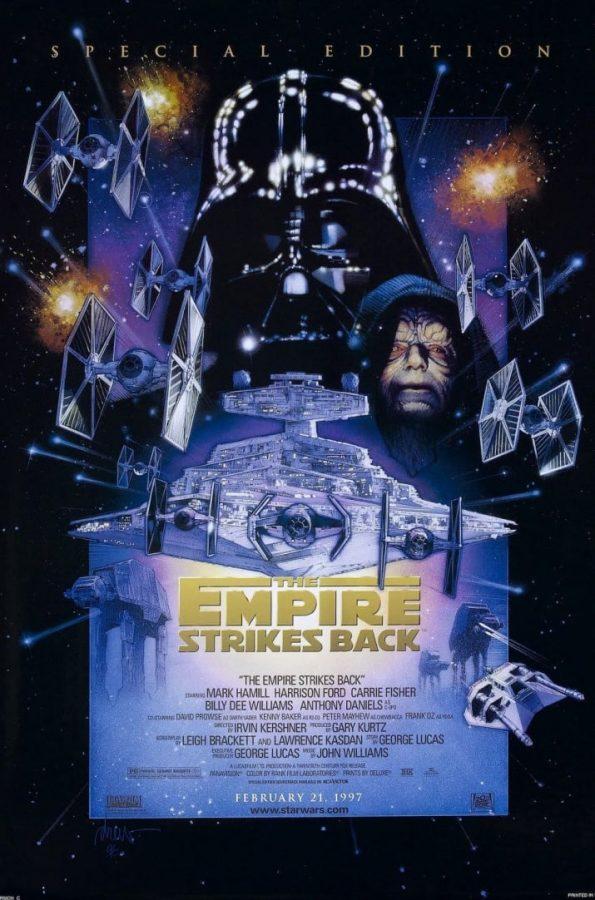 Harrison Ford, being the curmudgeon that he was, did not agree to appear in a third film for Star Wars so there were various plot points that had Han die or disappear at the end of the film. Apparently, the wrinkles of Albert Einstein were partly used as inspiration for the creation of the Yoda puppet. The scenes of the wampa attack on Luke helped to explain the large scar on Luke’s face, as Mark Hamill was in an automobile accident between filming the first and second Star Wars films. The famous scene in which Leia professes her love for Han was ad-libbed as Harrison Ford simply replied: “I know.”

Upon its release the film was not as financially successful as the original, and at the time it received some mixed reviews, it has come to find its place as the greatest of the Star Wars films. The Hoth scenes were shot in Norway, and the crew experienced a massive snowstorm, some of the crew could not escape from their hotel rooms. In fact, the scene of Luke escaping the wampa cave was shot during this snowstorm. Remaining shooting took place in London. Mark Hamill was given a different script that did not reveal Darth Vader was Luke’s father. The correct dialogue was only known by a handful of staff and actors before the film’s release.

Empire is an incredibly powerful sequel. The visual effects are extraordinary for a young company that had a limited budget in the first film, to becoming one of the great production companies ever. The plot is compelling, the characters have significant obstacles and they are developed in intriguing ways (we see a glimpse of Darth Vader’s head and learn he is Luke’s father, Luke is in training as he struggles to choose the right path as a Jedi, Han and Leia fall in love, Han’s friend Lando realizes the error of his ways and tries to do the right thing). We are also more introduced to the emperor, who is a sith lord, while he was merely mentioned in the original. It is a rare gift to be able to present heroes as dejected and on the verge of destruction at the end of a classic epic film. Again, the John Williams score is incredible and apt – it introduced the memorable “Imperial March.” Empire is ominous, dark, foreboding, shadowy, and because of this, it is a near perfect and delightfully unique hero tale that sets up the plot brilliantly for part III of this trilogy. Empire is often conveyed as the film that truly broke the trend of sequels being inferior to their originals.

3 thoughts on “Star Wars Episode V: The Empire Strikes Back”