When Henry VIII’s daughter, Elizabeth I (1533-1603), assumed the throne she returned a degree of normalcy to the rule of the Church of England, after the brief reign of Mary had attempted a return to Roman Catholicism. With Elizabeth, Protestantism returned to England in the “Elizabethan” era of Shakespeare and the war with Spain. However, since she was a “virgin queen,” she did not produce an heir, so instead her Scottish rival, Mary Queen of Scots’s son, James I, assumed the throne of England.

After James came to power, there was concern among learned men of establishing an authoritative English bible. Under Mary’s persecutions of the protestants, outcasts had developed their own bible, the Geneva Bible, which was created by English refugees in Geneva, and it was the bible of choice for the Puritans but not among the conservative clergy. There was need for an authoritative holy text (previously Henry VIII had commissioned the “Great Bible” and Elizabeth had commissioned the “Bishops’ Bible” and the English translation in the Geneva Bible was influential in the creation of the King James Bible (as it was based directly on translations from Hebrew and Aramaic). In particular the more radical groups, like the Puritans, took issue with certain translations within the “Great Bible” as well as the “Bishops’ Bible.”

Thus James approved a group of 54 revisers and translators for the new project (47 of which actually participated). The bible was divided among six companies, two of each, working at Cambridge, Oxford, and Westminster. Three panels worked on the “Old Testament” and two panels worked on the New Testament (one panel also took on fourteen books of the Apocrypha). Richard Bancroft, the Archbishop of Canterbury, oversaw the whole process. This was the first royally sponsored translation of the bible since the Septuagint in the 3rd and 2nd centuries. The objective was to bring the biblical into the popular (or “vulgar”) vernacular, one that was not simply read by the highly educated Latin-reading Catholics, and also a text that was devoid of biased secondary footnotes.

The translators used a variety of popular English texts of the bible, including William Tyndale’s partial English translation of the New Testament (the Tyndale Bible was the first printed Bible in English). Prior to Tyndale there was only the Wycliffe Bible, an English translation by John Wycliffe largely based on the Latin Vulgate. 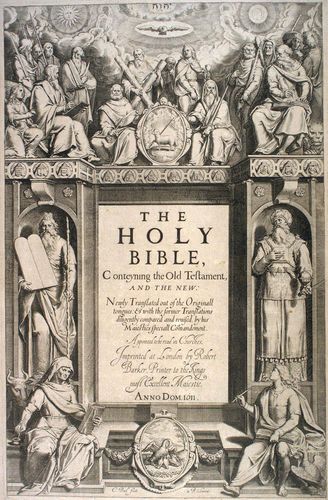 The original frontspiece of the King James Bible created in 1611 by Cornelius Boel, a Flemish engraver.

The King James Bible was first published in 1611 with two editions, though it underwent revisions in the coming, most notoriously for the infamous error in the Old Testament (forgetting to include “not” in “thou shalt not commit adultery.”) Over the following one hundred years, the authorized King James Translation became the standard bible (replacing the Latin Vulgate) used and it was also used in the development of the Book of Common Prayer in England in 1662. The literary style and rhythm made the KJV one of the great projects of the modern era.

The printing commission went to Robert Barker, of the famous Barker family printing company in London. The complete folio of the KJV was sold initially for ten shillings as loose leaf, or twelve shillings if bound. However, amusingly, Mr. Barker racked up a significant debt printing the new KJV so he was forced to sub-lease portions of the printing out to rival printers. Financial disputes broke out as Barker refused to share the full authorized KJV fully with anyone else, and profits were not being shared equally. Decades of litigation, debt, and imprisonment followed among rival printing families.

In the early years, the KJV was simply referred to as the “English Translation” (Thomas Hobbes referred to it as such) – it wasn’t until later that the “King James” moniker emerged in honor of the project’s patron. With the emerging standardization of the English language and its written form, a standard KJV Bible emerged in 1769. 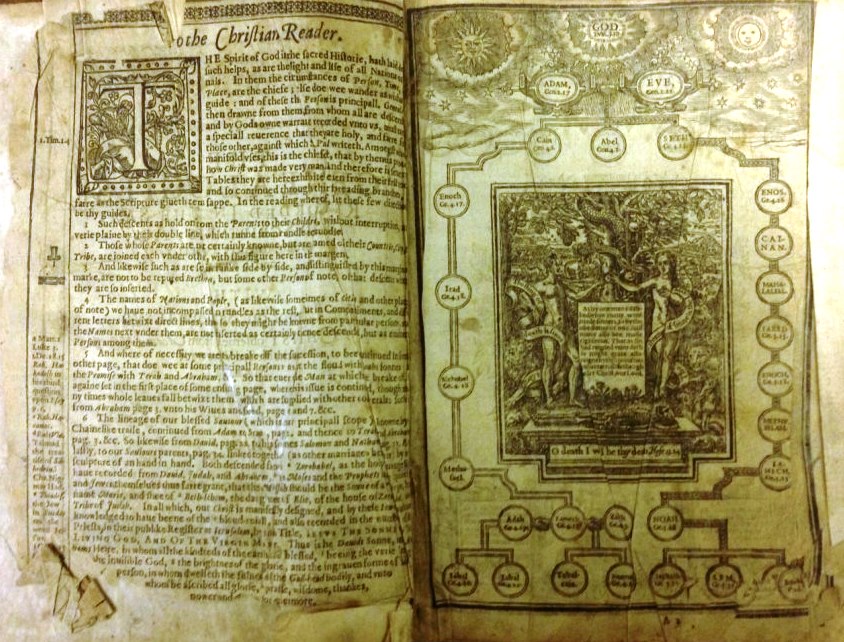 The first quarto version of the KJV from 1612.

The significance of the KJV and its release cannot be overstated. For the first time, lay people were granted permission to read the sacred word without punishment. No longer was Latin the sole source of communing with the divine (Latin was a relic of the old Roman Empire which established Christianity as the official religion of the empire under Constantine). Prior to the explosion of printing and translations of the Bible into the common vernacular, Jerome’s Vulgate was the only acceptable version of the Bible, and thus the text remained an exclusive book for only the most highly educated (an exclusivity that was vigorously defended by Sir Thomas Moore and others).