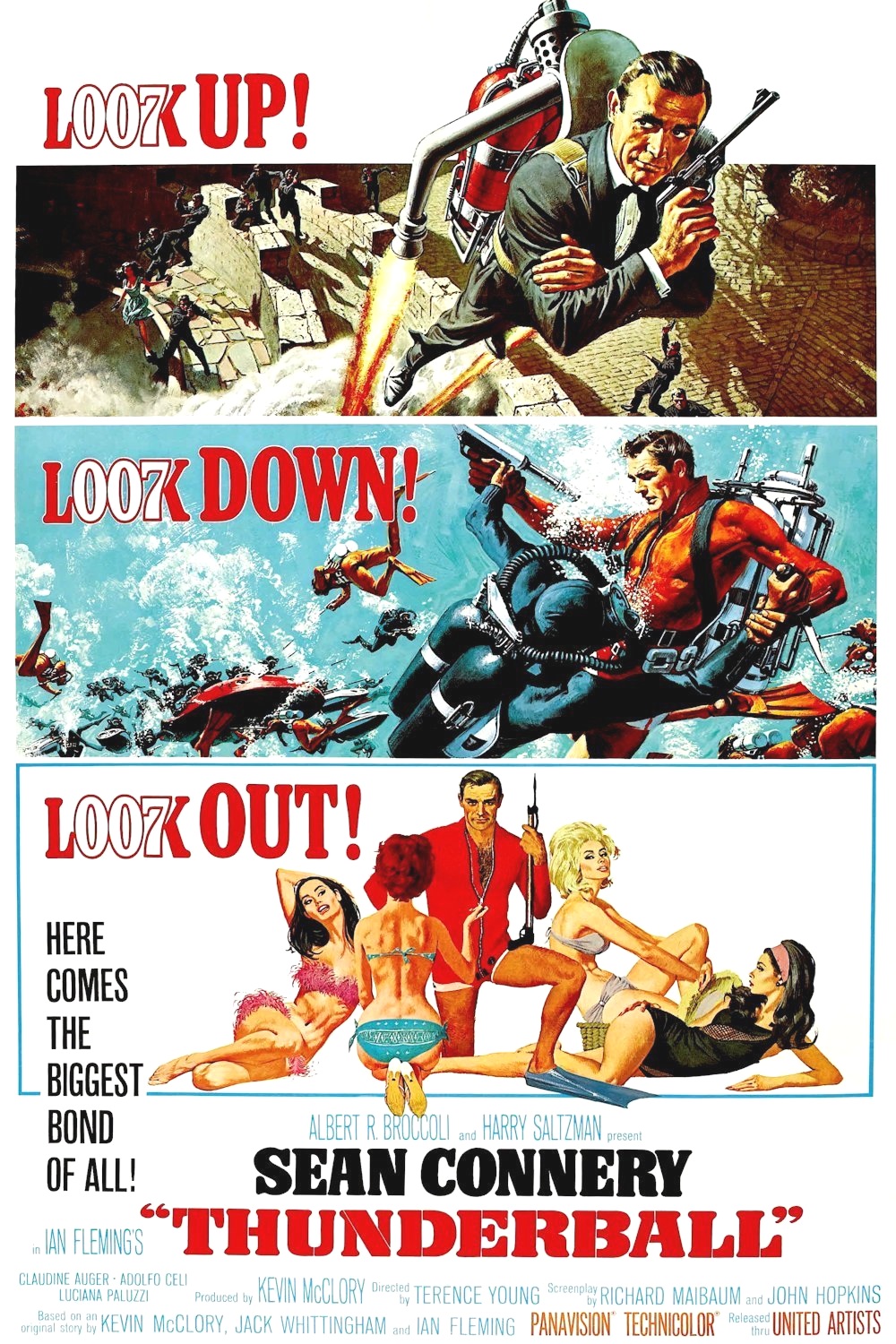 Terence Young was brought back to direct the fourth Bond film Thunderball in 1965. Apparently, Guy Hamilton was “creatively drained” after filming Goldfinger so he rejected the chance to direct another one right away. Thunderball was based on the 1957 novel of the same name, the ninth Bond novel by Ian Fleming (following For Your Eyes Only). The idea for the novel was borne out of a failed movie project between Ian Fleming and Kevin McClory, but when the movie fell apart Ian Fleming turned it into a novel anyway. McClory later sued, and he was given sole producer credit on the film with the contingency not to produce another James Bond movie for ten years (they assumed the franchise would die by then), but he then promptly returned with the spin-off Never Say Never Again once his ten years were up. Previously in Goldfinger, we received a brief allusion to the fact that Goldfinger likely works for the infamous international criminal organization called SPECTRE which is ever-present in Dr. No and From Russia With Love. At the outset of Thunderball, James Bond attends a funeral at a castle for a SPECTRE agent but he quickly realizes the ‘widow’ is actually the disguised agent in question. Bond confronts and kills him. He escapes the castle in a jetpack and hops into his car, using water cannons in his famous Aston Martin to attack his assailants (foreshadowing of the many underwater scenes in Thunderball).

At any rate, the story involves SPECTRE capturing two American nuclear warheads by sending out Emilio Largo (or “Number 2” of SPECTRE played by Italian actor Adolfo Celi who was dubbed throughout the movie) and the help of an agent who undergoes plastic surgery in order to match the American pilot carrying the nuclear warheads. The pilot’s sister named Domino is Largo’s lover. Largo’s team disguises the plane at the bottom of the ocean.

Meanwhile, Bond undergoes certain strength training for his back at a retreat where he encounters strange and treacherous activity. He then is called to MI6 along with all other 00-agents to deal with the nuclear crisis before being sent to Nassau in the Caribbean (at his request) where he deliberately becomes acquainted with Domino while diving in an effort to get closer to Largo (note: Domino is played by Claudine Auger who just passed away four days ago as of the time I am writing this). Meanwhile, Fiona Volpe enters the scene, a female assailant sent from Largo. Fiona eventually catches Bond and they dance at a club but when an assassin attempts to shoot Bond, he throws her in front of the bullet, instantly killing her (there is some debate among Bond fans as to whether or not Bond deliberately pushed her in front of the shot, since in the books Bond was strongly against wanton murder). Bond teams up with CIA agent Felix Leiter (Rik Van Nutter) and he also persuades Domino that Largo has killed her brother so she joins Bond, as well. Using her information to covertly join Largo’s crew, Bond dives underwater in scuba gear to move the nuclear weapons. Bond now knows the location of the weapons, however at the last moment Largo traps Bond underwater with some of his sharks (this scene apparently shocked Sean Connery who did not know live sharks were being released). Bond narrowly escapes and a huge fight ensues underwater between the forces of NATO and SPECTRE. Bond chases down Largo and fights him, but Domino appears and suddenly shoots Largo in the back with a harpoon gun. Bond and Domino are retrieved from the water via airplane.

The intro theme song for Thunderball was sung by Tom Jones. Johnny Cash initially submitted a song for “Thunderball” but it was not selected. The original song Eon chose was again by Shirley Bassey (as in Goldfinger) but her song was not ultimately used. Thunderball was hugely successful, in fact it was the most financially successful Bond film until Skyfall.

Thunderball is another fun Bond adventure film – it continues with the eccentric gadgets from Goldfinger and the recognizable exotic locations, Bond girls, daring escapes, and it features several notable underwater scenes. Having much of the tension take place underwater is a unique trope but ultimately yields yawns rather than applause. Thunderball is not the best Bond movie, but certainly not the worst.