Goldfinger is the classic third Bond film, based on the seventh Ian Fleming novel of the same name. The novel comes chronologically after Dr. No (which in turn follows From Russia With Love). This was the first of four Bond films directed by Guy Hamilton (the remaining three were in the ’70s). The original plan was to film Thunderball as the third Bond film, however it was mired in litigation with Ian Fleming so they moved forward with Goldfinger.

The plot: At the outset James Bond dramatically destroys a laboratory producing drugs somewhere in South America. He narrowly escapes an attack in his room with a double-crossing lover (Bond spots the assailant from behind by seeing a reflection in the eyeball of the girl he is kissing). Bond is then flown to Miami to keep an eye on a noted criminal, a heavy-set blonde man named, Auric Goldfinger (played by Gert Fröbe, a German actor who apparently spoke almost no English and so was dubbed). Bond spots him playing cards beside a hotel pool. Bond breaks into Goldfinger’s hotel room where he meets Jill Masterson (played by Shirley Eaton), an associate of Goldfinger’s who is covertly providing cheating information to Goldfinger’s card game below, however Bond interrupts, and Goldfinger loses his game, so Bond and Jill return to his room. Later, Bond is attacked in his room (we learn the assailant is Goldfinger’s henchman, a Korean man with a lethal bowler hat named Oddjob, played by Harold Sakata, an Olympic weightlifter from Hawaii who won the silver medal). Bond awakens to find that Jill has been killed – her corpse is covered in gold in one of the most iconic scenes in all of the Bond movies (certain questions linger: why did she die of the fabled “skin suffocation?” And why is there no gold anywhere else on the bed?) 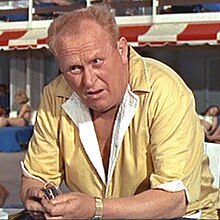 After reconnecting with London, Bond arranges to meet with Goldfinger socially at his country club. Bond beats Goldfinger at a game of golf (by cleverly switching their golf balls). Later, Bond is trying to uncover Goldfinger’s plans when he comes upon Tilly, the sister of Jill, who is trying to avenge her death against Goldfinger. However, Tilly is killed by Oddjob’s hat-turned-weapon. Bond is captured in a famous scene and he is strapped to a table where a laser slowly approaches his body to cut him in half. In order to escape, Bond convinces Goldfinger that MI6 is aware of his “Grand Slam” plan. Goldfinger decides to keep Bond alive for the time being. Bond is knocked out and flown on Goldfinger’s private jet to Kentucky (flown by Goldfinger’s pilot, “Pussy Galore” -named after Ian Fleming’s pet octopus and played by Honor Blackman). At the compound in Louisville, Kentucky, Bond is imprisoned, but soon he escapes to learn of Goldfinger’s plan to use toxic gas to infiltrate Fort Knox and rather than steal the huge supply of gold, he plans to set off a radiation bomb that will render the gold impossible to touch for 58 years due to radiation poisoning. This will increase the value of Goldfinger’s gold and his investments in China, while causing havoc in the West. As the plan unfolds, Bond is brought in handcuffs and sent below Fort Knox to die with the bomb. However, he escapes. He persuades “Pussy Galore” to alert the Americans to the attack, and at the last moment, Bond gets away and he kills Oddjob by electrocuting him beneath Fort Knox (Harold Sakata was injured during this shot, he burned his hand waiting for the director to yell “cut”). Bond stops the bomb from exploding with help that arrives -seven seconds are left on the bomb’s timer (i.e. “007 seconds”). At the end, Bond is flown to Washington DC to meet with the US President. However, the plane is hijacked by Goldfinger. a struggle ensues on the plane until Bond shoots out one of the windows and Goldfinger is sucked out to his death. Bond and “Pussy Galore” cannot regain full control of the plane so they parachute out. The film ends with Bond and Galore under the parachute on the ground as they are about to be rescued.

Goldfinger was the first major Blockbuster Bond film. It was the second Bond film to feature an intro song (following From Russia With Love), but the Goldfinger theme is the first sung by a pop star (performed by Shirley Bassey). The villain’s name in the novel was borrowed from the architect Ernö Goldfinger, and his character bears some resemblance. Fleming faced a lawsuit from Goldfinger upon the original novel’s release. Unfortunately Fleming passed away in 1964 so he never saw the spectacular rise in popularity of the Bond saga. For Goldfinger, a balding Sean Connery started wearing a hair piece. On an interesting note: the man who walks out and shoots directly at the audience in the first three Bond films is actually a Bob Simmons, Sean Connery’s stunt double.

While not a great film persay, it is a great James Bond film. Goldfinger is the standard-bearer for all future Bond films and is a wildly entertaining film, aside from its typical clichés. Many of the images in the film are iconic James Bond lore: Oddjob’s flying hat, a gold painted Bond girl, Bond’s classic Aston Martin, Goldfinger’s Rolls-Royce, Bond strapped to a table facing a lazer. Some of the aggressiveness of the early Bond films is dated and challenging for a modern viewer, but nevertheless Goldfinger is a terrific film -one of the best Bond adventures.