No classic film project would be complete without a thorough praise of Citizen Kane -the film that has often been dubbed the greatest film ever made. Orson Welles was initially thrust into the spotlight in his early twenties, directing Shakespearean plays and other great theatrical works (including a famous Haitian, all-black performance of Hamlet). He was initially born in Wisconsin and raised around Chicago. He was a student of the arts. Both his parents died unexpectedly early, leaving Welles to his own devices. He worked directing theatre as well as radio programs, traveling frequently between radio stations throughout New York (and making good money at the same time). Welles’s notable radio narration style was used throughout his filmography, as well. In 1938, Welles performed a radio series called ‘The Mercury Theatre on the Air’ and he narrated an infamous adaptation of H.G. Wells’s “War of the Worlds.” The serial created a panic as many listened to the story and thought an alien invasion was imminent. Amidst this new celebrity for Welles, he was offered the most amazing film contract in history. The President of RKO offered Welles the chance to write, direct, produce, and act in two films, giving Welles complete artistic control and the fabled right to his final cuts. Thus, Welles left for Hollywood and released his first film at the age 25, a masterpiece called Citizen Kane. The film was nominated for nine Academy Awards (despite being booed at the Awards), but it won only in the category of Best Screenwriting for both co-writers of the script: Herman J. Mankiewicz and Welles (Mankiewicz also worked on several amazing scripts including The Wizard of Oz and Dinner at Eight among others). Mankiewicz based the original idea for the script on the life of William Randolph Hearst, a man he knew and came to hate after being exiled from Hearst’s inner circle. Citizen Kane is a simple story about a formerly grandiose newspaper magnate who retires to his vast and shadowy castle, “Xanadu,” after a long and eventful life (not un-ironically mirroring the life of William Randolph Hearst). At the ominous outset of the film, Kane dies and his last word is: “rosebud.” It is snowing outside his castle and he drops a small snow globe which crashes and breaks. After his death, a group of reporters try to pin down the meaning and significance of his enigmatic last word. The rest of the film is told through a compelling series of five flashbacks with people who were close with Kane during his lifetime. Newsreels publish the highlights of Kane’s life. First, is Kane’s now-alcoholic wife who runs a nightclub but she refuses to talk so the main reporter, Jerry Thompson, goes to read a banker’s memoir in his archives (the childhood guardian of Kane) that tells the story of Kane’s impoverished childhood in Colorado. A gold mine is discovered on his family’s property so Kane is sent away to be educated. We are offered an image of Kane sledding in the snow moments before he is sent away. At age 25 (Orson Welles’s age upon completing the film), Kane gains full control of his trust fund and becomes a newspaper businessman with lofty ideals, but he quickly engages in shifty yellow journalism and alienates himself from those closest to him. During the stock market decline of 1929 he loses a controlling interest in his newspaper. Next, Thompson interviews Kane’s business manager who provides the story of Kane’s dramatic rise in the newspapers and his marriage to the niece of the President of the United States. Then, Thompson interviews Kane’s estranged best friend from his retirement home. He tells the story of Kane’s declining marriage and his affair with Susan, a singer, as well as Kane’s run for Governor of New York. Kane’s friend was also an employee at his newspaper in Chicago. However, his affair is discovered, ending his political career. Kane then pushes his lover (and now wife) into an operatic singing career, but his friend writes a terrible review which is dramatically discovered and printed by Kane, himself (after he fires his friend). Lastly, Thompson interviews Susan, Kane’s second wife. She tells the story of how she eventually left Kane following her failed operatic career, her isolation at Xanadu, and her attempted suicide. Kane begins violently destroying her room but he is brought back to balance when he sees a snow globe and is reminded of “rosebud.” Kane lives out his later years alone and depressed.

In the final moments of the film, the reporters stand amidst a huge warehouse of Kane’s priceless art and artifacts. Their voices echo as they realize their project has failed. Perhaps rosebud was merely nothing. However the omniscient camera leads the audience over to a pile of Kane’s possessions while they burn. Next in the pile is Kane’s childhood sled called “rosebud.” The sled “rosebud” comes to light as a metaphor for Kane’s lost childhood, the carefree moments of youth before Kane’s wild ambitions and his hopeful idealism were dashed and he was left alone to die among his riches. He had achieved the height of success and the fabled American Dream, but what did he truly gain? 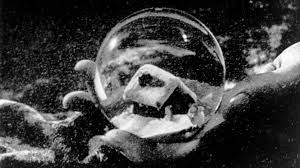 Upon its release, the film was a moderate success in some places, though it was a box office failure. It was largely panned and ignored by critics. William Randolph Hearst was so upset about the film (or any other RKO picture) that no mention of either was allowed in any Hearst publication. Much of the executives pushed RKO to destroy the original negative of the film at the urging of Hearst and his allies. Hearst even went so far as to publish conspiracy theories about Welles being a communist (which cause the FBI to open a file on Welles filled largely with Hearst newspaper clippings). Citizen Kane, meanwhile, was banned in the Soviet Union for portraying far too sympathetically a capitalist bourgeois elite in the visage of Charles Foster Kane. Apparently, Hearst’s salacious nickname for his long-term mistress, Marion Davies, was “rosebud.” It was also the nickname he gave to certain parts of her body. Hearst maintained incredible power in Hollywood -he threatened the studio establishment with searing publications about their predominantly Jewish presence or their decision to hire mainly “immigrants and refugees” rather than American citizens. Louis B. Mayer of MGM offered several hundred thousand dollars for the film to be burned. After it was all said and done, Welles had taken on the most powerful man in America and exposed the censorship and fear of the great cinematic art, and Welles ultimately lost his maverick status in Hollywood. Despite his deal with RKO, Welles no longer had independence as a director. His next film, The Magnificent Ambersons, was significantly revised by the studio, much to our detriment (read my reflections on The Magnificent Ambersons here). He spent much of the rest of his life trying to self-finance his own films and maintain his auteur status.

Citizen Kane is a perfect film in just about every way: a riveting story, impeccable cinematography, inspiring but simple effects, and a genius young director. Welles and Gregg Toland’s cinematography is nothing short of brilliant: the camera moves effortlessly and ominously, visual story-telling with numerous scenes combined into the same moment, and the hazy, lighting that is lifted directly from German Expressionist cinema. Citizen Kane is the quintessential cinematic masterpiece.