Papias is said to be a compatriot of Polycarp, as both were “hearers of John” (which perhaps means they were both disciples of John the Apostle). Papias is typically labeled the “bishop” of Hierapolis, located in central Turkey. Everything we know about Papias today comes down to us through the latter writings of Irenaeus and also Eusebius. 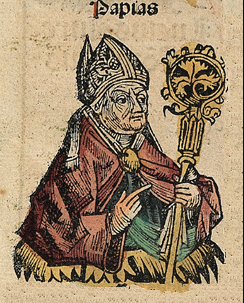 A depiction of Papias from the Nuremberg Chronicle, a 15th century illustrated German re-telling of the history of the world beginning with a biblical summary)

Papias is known primarily for having written the Exposition of the Sayings of the Lord. Nearly the entirety of this text is now lost, save for a few fragments from the writings of Irenaeus and Eusebius (though apparently the full text may have survived as late as the middle ages in Europe).

In some of the fragments, Papias interestingly describes how he took only an interest in hearing directly from the “elders” -that is, the apostles of Jesus, or the generation immediately following them. He didn’t care much for the fanciful stories, or even the books, but only for the commandments delivered by Jesus. A benefit offered to someone living so close to the events of the New Testament.

Perhaps the most interesting piece of Papias’s writings (via Eusebius) are concerning the origins of the Gospels. According to Papias, John was an interpreter of Peter, who wrote nothing down in order but simply recounted the activities of Jesus as he remembered them. This was to form the Gospel of Mark. Similarly with the Gospel of Matthew, he took the ordered arrangement that was being established and he translated it into Hebrew for the Jews to consider (hence, why when reading the Gospel of Matthew one gets the sense that the author is seeking to bring the new Christian teaching to the ears of traditionally Jewish people, rather than Gentiles as in the Gospel of Luke).

Papias apparently made other remarkable claims about the death of Judas and the stench his innards left on the ground, as well as some echoed stories from the now lost Gospel According to the Hebrews, along with some strict interpretations of Jesus’s return to Earth one day.