Polycarp is one of the so-called “apostolic fathers” of the Christian church, along with Clement and Ignatius (as well as Papias). He is mentioned briefly in the surviving epistles attributed to Ignatius, as well as in a famous text documenting Polycarp’s martyrdom. Rumors abound as to the life and times of Polycarp, and subsequent miraculous events surrounding his life and martyrdom, have been documented in a letter between two Christian churches in Turkey. As with other early saints, various superstitions and miraculous events are attributed to Polycarp. 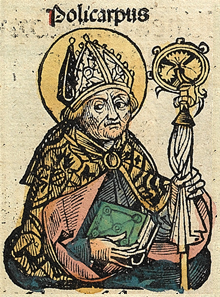 (A depiction of Polycarp from the Nuremberg Chronicle, a 15th century illustrated German re-telling of the history of the world beginning with a biblical summary)

Christian tradition holds that Polycarp was a “hearer of John” (that is, a disciple of the apostle John, as interpreted further down the road by Eusebius). Polycarp is typically associated with Smyrna, located in modern day Turkey (sometimes he is referred to as the “Bishop of Smyrna”). Both Irenaeus and later Tertullian claimed to have heard Polycarp speaking publicly, when they were young men. Polycarp was eventually captured, bound, and burned at the stake as a Christian martyr. When the fire failed to consume his body, he was stabbed to death and according to the legend, so much blood emerged from his body that it quenched the flames. He was killed in Smyrna. Perhaps he lived from around 69 AD until his martyrdom in 155 AD. Irenaeus claimed to have been Polycarp’s disciple. Irenaeus preserved the work and teaching of Polycarp, as well as another “hearer of John” -Papias, a Greek apostolic father who wrote a now mostly lost (save for fragments from Irenaeus) five volume exposition interpreting the sayings of Jesus, and offering a unique, albeit somewhat confusing, perspective into the early establishment of the canonical gospels.

At any rate, the sole surviving work attributed to Polycarp is a letter written to the church of the Philippians. The letter, itself, is largely unremarkable. Polycarp praises the church for their strength and encourages them to continue to ‘gird up their loins’ and follow in their Lord’s example. He also praises Paul and his letter to the Philippians. He encourages virtue, rather than the pursuit of money, and he teaches honor to wives as well as widows. Polycarp also encourages faith, prayer, obedience to church elders and deacons, as well as perseverance and especially patience. In general, the tone of his letter is positive and hopeful. Along with the letter, Polycarp sends Crescens and his sister to the church of the Philippians. This brief letter is all that has survived from the life and times of Polycarp.