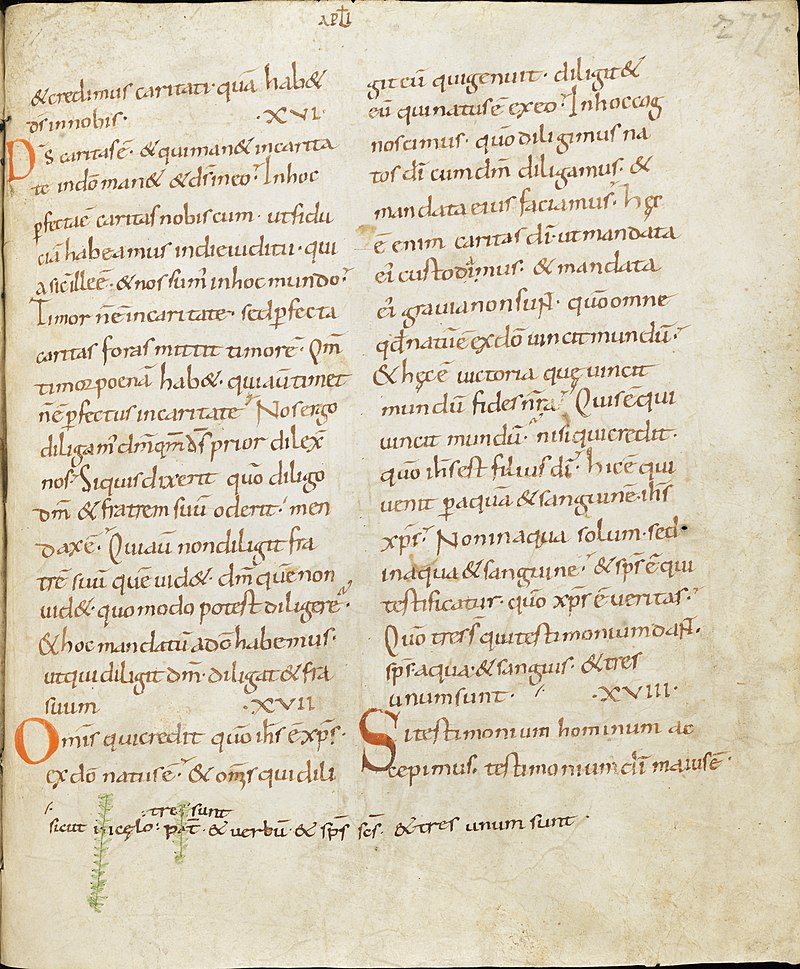 Eusebius Hieronymus Sophronius, or “Jerome,” is likely the most significant Biblical translator in history. He was born in northeast Italy in 345, and by the time he was 29, Jerome had become a devout and ascetic Christian. He claims to have had a dream chastising him for being a follower of Cicero, not of Christ. Following this dream, he left his home to live alone in the Syrian desert, reading and translating the Hebrew scriptures. When he returned to civilization, Jerome was the greatest translator of his epoch.

In 382, he became administrative secretary to Pope Damasus. (Pictured left is an 8th century version of the Vulgate, the Gospel According to John).

In Jerome’s day, Greek was widely spoken and read in texts. All of the Biblical texts could be read in Greek. There were varying translations available of Coptic and Syriac and others, many of which were varying in content. Aware of this problem, Jerome wrote to the Pope requesting the opportunity to produce an authoritative text. A similar problem arose many hundreds of years later during the creation of the King James Bible -the need for authority.

The Pope responded in 382 by commissioning Jerome to compose the masterful “Vulgate,” The editio vulgata or “common version.” First, he translated the New Testament from Greek into Latin, and then began translating the Psalms, Job, and several other texts from the Old Testament into Latin from the Greek Septuagint. However, he soon became aware of the Septuagint’s failings, so he endeavored to translate the Old Testament directly from the original Hebrew manuscripts. He completed this massive undertaking in about 405, and his translations of the Psalms from the Septuagint (the so-called “Gallic Psalter”) was widely praised and continued to be used for years alongside his original Latin translations. The Vulgate was Jerome’s great accomplishment.

For the next one thousand years, Jerome’s authoritative Latin compendium was edited, revised, and superseded numerous times throughout Europe. It was not until the Catholic Council of Trent in 1546 that the Vulgate was decreed the authoritative text for the Church. In 1965, at the second Vatican Council, a commission was established to revise the Vulgate.

The Psalters were widely read and distributed among Christian households, and they were turned into contemporary hymns and songs.

Jerome died around 420, and he was later made a Saint by the Catholic Church. His Feast Day is September 30.

Here is a wonderful example of a Latin ‘Gallican Psalter’ by Jerome. Although he later discarded his translations from the Greek Septuagint as being inaccurate, they are nevertheless powerful. This is Psalm 23 (verses 1-4), in both Jerome’s Gallic Psalter Latin translation, alongside the beautiful King James translation. This is one of my favorite Psalms:

King James Translation of Psalm 23
1 The Lord is my shepherd; I shall not want.
2 He maketh me to lie down in green pastures: he leadeth me beside the still waters.
3 He restoreth my soul: he leadeth me in the paths of righteousness for his name’s sake.
4 Yea, though I walk through the valley of the shadow of death, I will fear no evil: for thou art with me; thy rod and thy staff they comfort me.