All Quiet on the Western Front

All Quiet on the Western Front (1930) Director: Lewis Milestone

“I saw him die. I didn’t know what it was like to die before!” 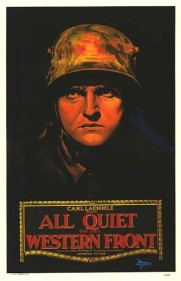 All Quiet on the Western Front is the first truly great anti-war film. It is based on Erich Maria Remarque’s novel of the same name published in 1929 and later banned by the Nazis. Remarque experienced first-hand the life of a German soldier during World War I before he was severely injured with shrapnel wounds and struggled to re-accustom himself to civilian life, a key theme in the story. The film was made on a budget of $1.25 million for Universal Pictures, under the leadership of Carl Laemmle, Jr., on acres of California’s open ranch lands with over 2,000 extras, and it was directed by Lewis Milestone.

All Quiet on the Western Front was nominated for four Academy Awards, winning Best Picture. It opens with the title reading:

“This story is neither an accusation nor a confession, and least of all an adventure, for death is not an adventure for those who stand face to face with it. It will try simply to tell of a generation of men who, even though they may have escaped the shells, were destroyed by the war…”

The story begins in a small German town where celebrated young soldiers head off to war. In the schoolhouse, a German professor explains to his students the heroism of the warriors who go to fight and die for the homeland. All the boys rise in a fit of rapture, elevated by their teacher’s jingoism. All the young men rush to enlist in the German Imperial Army, especially Paul Baumer (Lew Ayres).

Together the boys are put through a grueling boot camp before being marched to the front lines on the Western front where they encounter a horrendous lack of food, clothing, shelter, and continual bombing from the French army. They are invaded by rats, forced into trench warfare and hand-to-hand combat, and find themselves routinely driven to the point of sheer insanity waiting for the explosions to stop.

At a moment of pause, while on temporary leave, they ask themselves how a war is started. Does a mountain in Germany get mad at a field in France? The boys have nothing against the Frenchmen personally. They bemoan the richness of the Kaiser and the manufacturers who get rich off the war. Paul then goes to visit his wounded friend whose legs have been amputated. The boots of the dying are passed to the boots of the living –one soldier to another.

In the next battle, Paul is trapped in a foxhole and stabs a Frenchman to death. The man slowly dies throughout the night and Paul apologizes to the unknown man’s corpse. Paul rummages through the soldiers things to find a photograph of his two children and Paul weeps. Later Paul is hit with shrapnel (just like Erich Maria Remarque), and he is sent to the hospital before eventually going home on leave only to find things are not the same. He returns to his old classroom to find his jingoistic professor still whipping up children into a rage of nationalism to fight for Germany. Paul contradicts the professor and explains the horrible brutality of war. Paul is then publicly castigated as a coward.

With no place to go, Paul returns to the front only to find that two of his old comrades are still surviving, the rest are baby-faced young boys aged sixteen. While greeting one of his comrades they are both hit by a bomb and his comrade dies. Paul wanders aimlessly out to the trench and rests at the Gatling gun. During a rare moment of calm, he notices a small butterfly resting amidst the carnage. While reaching down to pick it up, a French sniper shoots and kills Paul before he can grab hold of the butterfly.

The film ends with scenes of the young troupe marching off to war –tired, scared, and helpless.

All Quiet on the Western Front is one of the greatest war films ever made. It is both harrowing and haunting in its graphic depictions of trench warfare and the madness of the ‘Great War’ -a truly memorable film.

2 responses to “All Quiet on the Western Front”