The rage, or menin sometimes translated as “wrath”, of Achilles is the opening word of the Iliad and bears crucial significance with respect to the remaining content of the epic. This opening word stands in contrast to the first line of the Odyssey, a text about a man, whose opening word is andra, meaning “man.”

In Book I, the rage of Achilles finds its form as a result of Agamemnon ignoring the priest of Apollo, causing the god to send a plague to the Achaeans. Achilles, frustrated with Agamemnon’s tenuous leadership, publicly berates him. A competition ensues between the two men, revealing an Achaean contest for the best of men -the most excellent. Agamemnon believes himself to be the best of men because he rules the greatest number, and therefore he is deserving of the greatest goods. This belief causes Agamemnon to take Briseis, a prize rightfully won by Achilles, to claim her as his own. Achilles, however, believes himself to be the best of men because he is the greatest warrior. His powerful aggression causes fear among the Achaeans and Trojans alike. Both men claim the right to be the most excellent.

In a world governed by force and compulsion, war is redemption for men. Conflict offers the opportunity to gain honor, “where men win glory,” so they can assert their power. Agamemnon commands his great numbers to forcibly take the property of Achilles, thereby reasserting Agamemnon’s greatness. Achilles’s response is to forcibly retaliate against Agamemnon by killing him, but he is prevented by wise Athena. Instead, Achilles pursues a strategy of inaction. He knows that his deadly skills as a warrior are most valuable to Agamemnon and the Achaeans. Therefore, in order to assert his excellence, he withholds his sword and prevents his Myrmidon troops from entering the battle as punishment to Agamemnon. 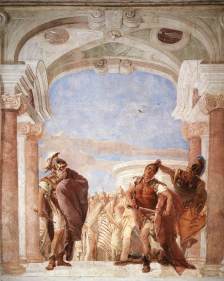 “The Rage of Achilles” by Giovanni Battista Tiepolo in 1757

Achilles prays to his mother, the goddess Thetis, to turn the tide of war against the Achaeans. By actively not participating in the battle, a version of what might be called “civil disobedience,” Achilles ponders the question of returning home to the house of Peleus where a long and peaceful life awaits him. Long ago, a prophecy was made that Achilles could either remain in Troy and kill Hector only to die shortly thereafter, or instead, he could return home to a long but forgotten life. Achilles makes a choice between having a glorious and memorable death, or a long but forgotten life at home. The character and quality of a hero’s death is paramount, and being remembered is the only chance at an enduring life among men.

Achilles’s rage, in Book I, is a decisive factor for the Achaeans. By offending the honor of Achilles, Agamemnon seals the fate of the Achaeans. Achilles’s great wrath is the only impulse that can overcome even the will of the gods, though it cannot escape his fate. Rage, the deep desire for vengeance, is a fundamentally human impulse. Like a wild untamed beast, Achilles struggles to force himself to return home, yet he refuses to return to battle as it would require confirmation of Agamemnon’s excellence. He is in a stasis.

Although there is an attempt made by Odysseus and a group of Achaean leaders in Book IX to offer to return Agamemnon’s stolen gifts to Achilles, and thereby persuade him to rejoin the battle, this ultimately fails. Achilles remains firm, he will not persuaded. Achilles privately mentions to Patroclus that he will not remain angry forever, though, but only until the Trojans have beaten the Achaeans all the way back the hulls of their ships. He mentions this upon taking “pity” on his friend Patroclus, with tears streaming down Patroclus’s face (Book XVI 1-19). Achilles allows Patroclus to rejoin the battle with the Myrmidons because young and impressionable Patroclus had been moved by the words of Nestor when visiting the Achaean front lines. Upon his tragic death, Achilles redirects his anger instantly.

“…the spirit within does not drive me

to go on living and be among men, except on condition

that Hector first be beaten down under my spear, lose his life

and pay the price for stripping Patroclus, the son of Menoitios” (Book XVIII, 90-93).

He wishes that all the strife and anger of man would go away for both gods and mortals. Due to the death of Patroclus, he will actively forget the past transgression of Agamemnon and refocus his rage on Hector.

Notably the rage of Achilles, a natural outward impulse, is initially directed inward -toward the Achaeans. The greatest threat to Achilles’s power comes from within his own tribe. However, once his great passions are drawn externally, toward Hector, the killer of Patroclus, Achilles immediately relinquishes his rage toward Agamemnon. He, as the archetypal warrior, and can only direct his anger toward one kind of enemy: internal (against the city) or external (toward an enemy of the city). It is, therefore, in the interest of the city to see that the warrior is treated justly internally, but unjustly externally -that he faces an enemy. In this way, the warrior and his unbearable rage, helps to reinforce the city as a cohesive whole.

However, the rage of Achilles is vengeful, and is therefore reactionary. He is driven toward revenge, or perhaps requital. Take, for instance, the stripping of Achilles’s armor from the body Patroclus in Book XVI, an unforgivable act in Achilles’s eyes. In order to claim his vengeance on Hector, Achilles mercilessly slaughters him, and with his dying words, Hector tries to persuade Achilles not to leave his body for the dogs, but stubborn Achilles refuses -he has a “heart of iron” (Book XXII, 288-361). His interaction with Hector stands in stark distinction to other Trojan – Achaean battles, predicated on mutual respect. Achilles, instead, yearns to demoralize and defile the body of Hector. His rage transcends the limits of law and custom in battle.

The Anger of Achilles by Jacques-Louis David (1819)

Finally, the last point to be made in an examination of Achilles’s rage, occurs in Book XXIV, the final book of the Iliad. Priam, king of Ilium, comes to Achilles to plead for his son’s body to make a proper burial. Throughout the text, only two people successfully persuade Achilles and both occur in weepy moments of lament. The first, as discussed earlier, is the weeping plea of Patroclus to rejoin the Achaeans and help push the Trojans back. The second, however, occurs when King Priam approaches Achilles, physically takes his hand, and beckons him to recall his own father, Peleus. How is it that Achilles allows himself to be persuaded during these impassioned moments, but he will not listen to the reason of Odysseus or Ajax? Achilles, the archetypal warrior, does not have the capacity for reason. He, instead, allows his heart and his wild passions to overpower him. In order to persuade the warrior, one must physically regulate his emotions. His only weakness is in what exposes his vulnerabilities, whether it be his heel or his deep affection for a friend or a father. In both cases his heart is softened. Achilles is vulnerable to pity and sorrow. However, this great pity is intimately connected to his deep sorrow -the warrior must be made to feel more than to discourse, yet the problem lies in the need for the city to have warriors who take honor and pity among there own stock, yet feel rage toward the city’s enemies. For Achilles, this rage takes its greatest form in reaction to the death of an intimate friend.

The warrior, unlike the magistrate or king, is dangerous. His untamed passions are the fruit of chaos, both within and without the city. Therefore a wise leader, like Nestor, who compels the spirit of the young Patroclus, can wisely redirect Achilles’s rage by foreseeing the death of his friend. It is far better that the great warrior’s rage is channeled outward, rather than inward, in order for the city to endure.

For this reading I used the Fagles and Lattimore translations.

5 thoughts on “What is the Rage of Achilles?”