“Two great lovers of the screen in the grandest of romantic comedies!”

It Happened One Night is a terrific little nostalgia movie, an entertaining romp filled with comedy and romance. It is light-hearted and whimsical, and comes well-recommended, though in many ways it is also a scandalous film playing on overtly sexual themes -a feat which could only be accomplished prior to the Hays Code. It was a sleeper hit that effectively swept the Academy Awards and was rumored to have brought about the demise of undershirt sales in the U.S. after Clark Gable’s bare chest was featured prominently. Ever the American optimist joins with his screenwriter Robert Riskin to create a simple fantasy of the possibilities and romance of the open road.

A wealthy heiress, Ellie Andrews (Claudette Colbert), tries to elope with a pilot, despite her father’s misgivings. She runs away and travels on a bus to New York where she meets Pete Warne (Clark Gable), a fired newspaper writer. Together they go on a many adventures, as Pete vows to help her arrive in New York. They stay in hotel rooms, where Pete respects their separate sleeping areas by constructing a “wall,” or a blanket that delineates their bedrooms. In addition, they hitch-hike, along with other hijinks. One of the most famous scenes in the film occurs when Pete tries to hail a car, but fails. They only succeed when Ellie lifts her dress to reveal her leg. Instantly a car stops to pick them up. Eventually Pete and Ellie fall in love, Pete gets his old job back, and he narrowly misses Ellie on the road until she runs away at the altar with her pilot fiancee. Peter and Ellie are reunited at the end with the approval of her father.

Directed by the great Frank Capra, It Happened One Night was not an initial success. After a second release, it gained traction among small towns and local cinemas for the appeal of its simple romance story. Eventually it became a box office smash success (easily Columbia’s most successful film to date). Ironically, in 1935 after being nominated for the Academy Award for Best Actress, Colbert decided not to attend the ceremony in order to take a cross-country road trip. When it was announced that she won the award, a studio executive asked someone to escort her off the train so she could arrive in time for the ceremony, as the train had not yet left the station. The film won all five Academy Awards: Best Picture, Best Director, Best Actor, Best Actress, Best Writing -an extraordinary feat for such a simple little picture! 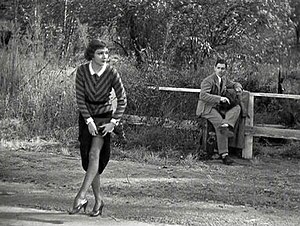 Peter: “Why didn’t you take off all your clothes? You could have stopped forty cars.”
Ellie: “I’ll remember that when we need forty cars.”

Ellie: “You’ve been telling me what not to do ever since I can remember.”
Mr. Andrews (her father): “That’s because you’ve always been a stubborn idiot.”
Ellie: “I come from a long line of stubborn idiots.”